You might have heard horror stories of frozen paintballs causing huge damage, breaking gear, and hurting players. These accounts can turn off potential players from picking up the sport, and perhaps you want to see if it’s common practice before signing up for your local tournament.

Or maybe you’re just looking for an easy way to extend your ammo’s lifespan. Most things keep well in the freezer, and paintballs might be no different, right? 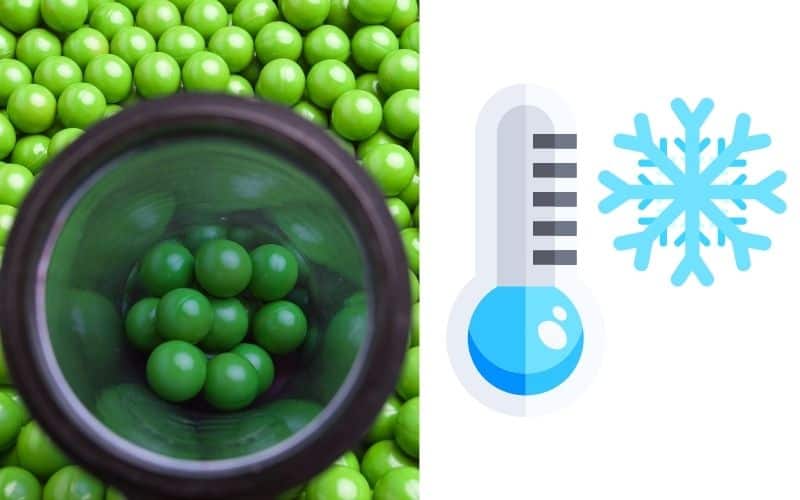 Either way, you’ve probably asked yourself the question: Can paintballs be frozen?

Although paintballs can be frozen, keeping them in your freezer only makes the shell brittle, with the paint inside becoming dry or gel-like. Using more intense methods like liquid nitrogen won’t give you the results you’re imagining, either. The paintball might be harder, but it would also be more fragile. Loading it into your paintball marker could break the shell, possibly damaging your barrel.

What are paintballs made of? 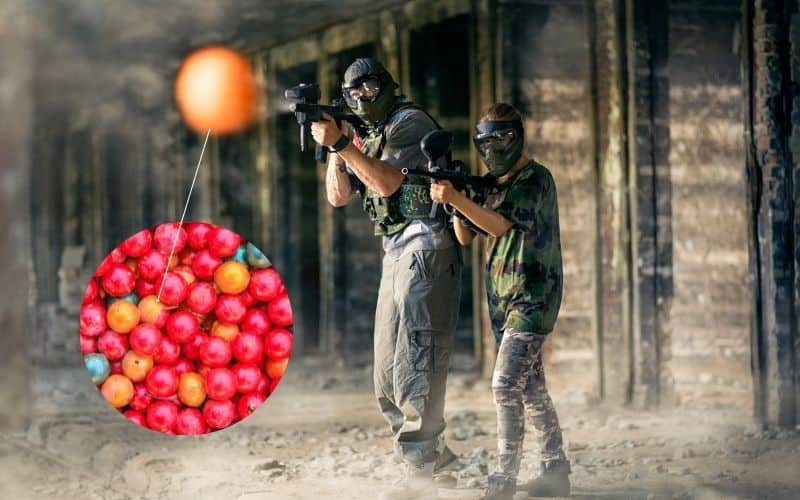 Paintballs are gelatin spheres containing a mixture of dye, polyethylene glycol, and other substances. If you bought your paintballs at a store, they’re usually nontoxic, biodegradable, and water-soluble.

Most major manufacturers also use antifreeze ingredients in their paintballs, which keeps them at the same consistency and quality in colder climates. This means players don’t have to worry about their paintballs freezing over on a particularly cold day.

Can you freeze a paintball? 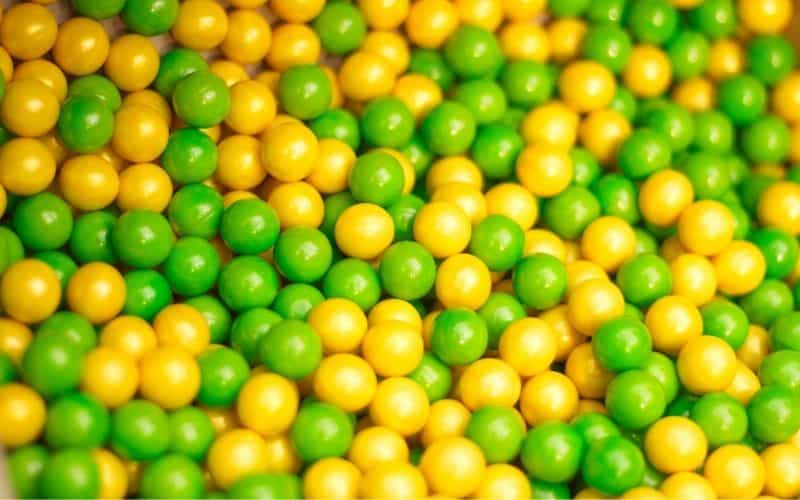 Freezing a paintball causes it to become dimpled, losing its spherical shape. This makes the trajectory of the paintball inconsistent, as its surface is no longer smooth, and reduces its accuracy.

The shell becomes brittle, meaning less force is needed for it to break. With that logic, frozen paintballs would break easier than regular paintballs.

The worst part of freezing paintballs is what it does to the paint inside. After being frozen, the paint either dries up or becomes a toothpaste-like consistency. High-quality paintballs have thick, opaque paint that shows up on your opponent easily. The drier paint in frozen paintballs will give you the complete opposite result.

So while you can freeze paintballs, they won’t freeze into solid balls that can break lenses or tear through the skin. The only way to get a harder paintball is to use a more intensive approach.

But even if someone did have access to dry ice or liquid nitrogen, why would they? No matter the method used, frozen paintballs are misshapen, fragile, and completely ineffective. Not exactly ideal for competitive play.

What happens if you load a frozen paintball in your marker? 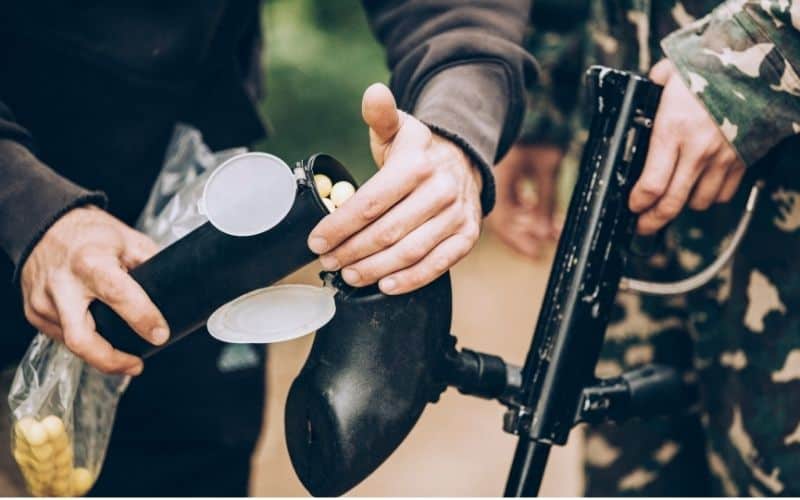 A paintball marker is a gun-like equipment used to aim and shoot your paint. We know that it is technically possible to freeze paintballs, so what happens if you load them into a marker?

First thing is that it’ll take quite a bit of luck to even get a frozen paintball into your barrel. On the trip from your freezer to your marker, it’s more likely that the paintball will have already thawed out. At that point, you would be left with condensation-covered paintballs that stick to one another and are unusable.

But if by some miracle you managed to get a frozen paintball in your marker, you’re still in for a terrible time. Frozen paintballs are fragile, and there’s a high risk of the paintball breaking inside of your marker. This coats the insides of the barrel with paint that can shoot out sporadically from your paintball gun when you fire.

All-in-all, loading a frozen paintball into your equipment is a bad idea. The best-case scenario is you’re left with messy, ineffective ammo. The worst case? You’re left with a damaged paintball marker needing repair or replacement.

Does a frozen paintball hurt more than a regular paintball?

There’s no definite way to measure how much getting hit by a paintball hurts. But while opinions may differ from person to person, a frozen paintball is probably not going to hurt any more than a regular paintball.

But in reality, the non-frozen paintballs were more painful. They even jokingly recommended freezing your paint to save yourself from the pain.

Frozen paintballs hurt less, possibly because of the brittleness of the paint’s shell. Being so fragile means the paint would break easier on impact, interrupting its momentum and lessening the force you feel on your body.

Can you freeze paintballs for preservation? 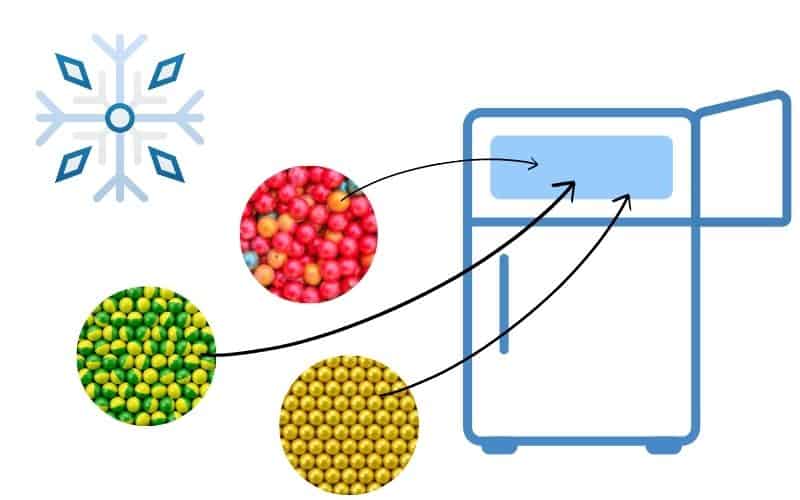 Let’s say you’re not interested in the false claims that frozen paintballs can improve accuracy, deal more damage, and turn you into a star paintball player overnight.

Maybe you have a pack of paintballs that are nearing expiration and need to extend their lifespans until your next game. Unfortunately, freezing will only ruin them for good, and you’ll need to run to the store for a new pack.

Moisture is the enemy when it comes to preserving paintballs. It makes the paint swell, with the shell slowly deforming as it sucks up all the humidity in the air. Freezing your paintballs will only speed up the process because of the condensation after thawing.

Instead of freezing your paintballs, check the instruction manual that comes with them; they usually come with instructions for storage. Generally, it is best to keep the paintballs in a dry place and out of direct sunlight. Avoid extreme temperatures. Doing these things can extend your paintball’s shelf-life by at least four months, even upwards of a full year!

If you were thinking of throwing that new pack of paintballs in the freezer, don’t bother. Freezing does not make your paintballs more accurate, more painful, nor can it extend their shelf life. All you’re going to get is deformed, brittle ammo that will likely hurt your gun more than your opponents.

What Oil to Use on Paintball Gun?