While squirrels, cats, and birds are greatly loved for their adorable antics and fuzzy, fluffy appearance, these critters can cause some serious property damage and sometimes even the natural habitat of a certain location.

If you’re looking for ways to drive away or even exterminate a squirrel, cat, or bird infestation in your neighborhood, then you may have thought about using a paintball gun to do the job. 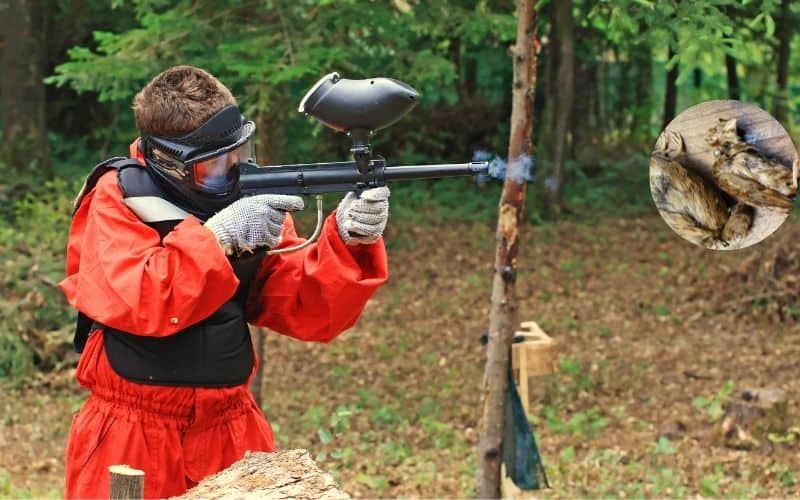 Today, we explore the question:

Will a paintball gun kill a squirrel/cat/bird?

But before we move on to answer that, let’s first look at the basics, functions, and types of paintballs.

There are several categories of paintball guns; however, they generally consist of the following components.

As the name suggests, mechanical paintball guns are prepared mechanically for them to work. Meaning you’ll have to manually load new bullets, cock the gun, and adjust accuracy every time you shoot.

Older mechanical paintball gun models produce a slower velocity (around 200 ft/sec to 250 ft/sec), which means they are generally safe and won’t cause as much harm.

Newer models of mechanical paintball guns, on the other hand, can produce a much higher velocity (around 175 ft/sec to 300 ft/sec).

Electric paintball guns  are often called automatic paintball guns because they require no manual loading or cocking. You can even adjust the settings to release multiple bullets at a time.

Electric paintball guns normally release bullets at a velocity of 300 ft/sec to 400 ft/sec. However, some states require manufacturers to keep velocity under 275 ft/sec, for safety reasons.

Will a Paintball Gun Kill a Squirrel/Cat/Bird?

An old-school mechanical paintball gun can injure a target as small as a squirrel or a bird. However, it might not instantly lead to death.

It’s only when you hit the animal on a critical area — like the chest or head — that killing it might be possible.

Electric paintball guns can shoot bullets at high velocity, so you may have a higher chance of killing smaller species of birds and squirrels with just one shot.

Keep in mind to practice care and caution when using your paintball gun, especially in the outdoors.

After all, you don’t want to cause animals unnecessary pain and suffering.

What Will Happen if You Shoot a Squirrel/Cat/Bird With a Paintball Gun? 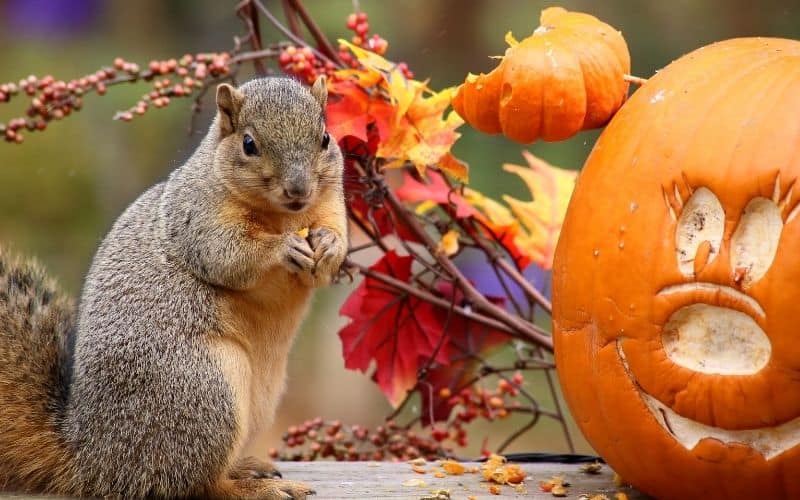 Squirrels are small, delicate creatures. While they aren’t the peskiest of critters, they can still cause significant property damage — especially if they find their way up to your attic or other parts of your house.

Paintball guns won’t instantly kill squirrels; however, getting hit by a high-velocity marker can cause the animal significant external and internal injuries e.g., fractured bones, internal bleeding, and significant bruising.

If your aim is good, you can shoot the squirrel straight to its chest. This will cause its heart to stop, therefore, killing the animal in the process. 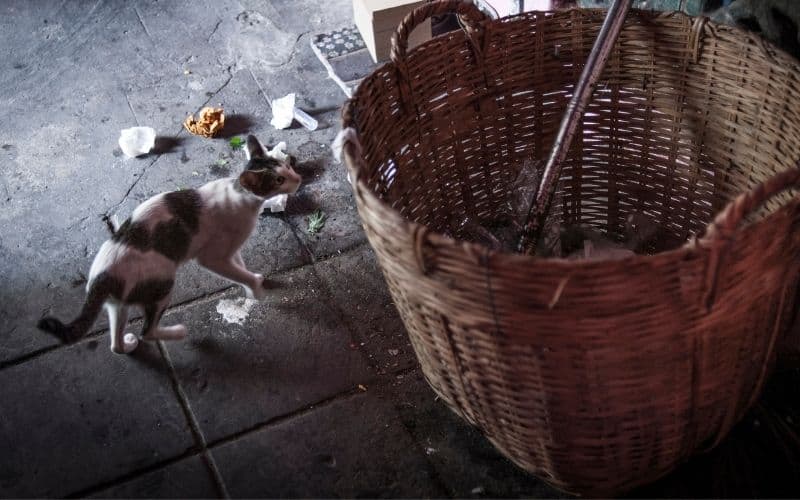 Cats are much larger than birds and squirrels, making them almost impossible to kill with a paintball gun — even the more powerful paintball guns used for sport.

Still, paintball markers are powerful enough to cause severe damage and injury to a cat, especially if it’s shot at vital places like the eyes or the stomach. 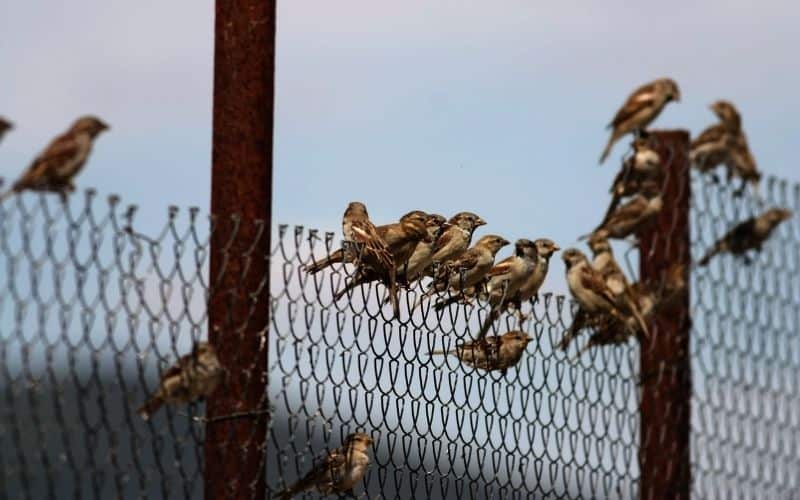 Shooting a bird with a paintball gun won’t cause instantaneous death. However, much like with a squirrel and cat, it can cause severe internal and external damage to the animal.

Paintball guns can break a bird’s wings, legs, and even cause damage to organs and induce internal bleeding.

For smaller bird species, a paintball gun to the head or chest may kill a bird on the spot. You’ll need to have a good aim if you want to achieve this.

Is It Illegal to Shoot Squirrels/Cats/Birds With a Paintball Gun? 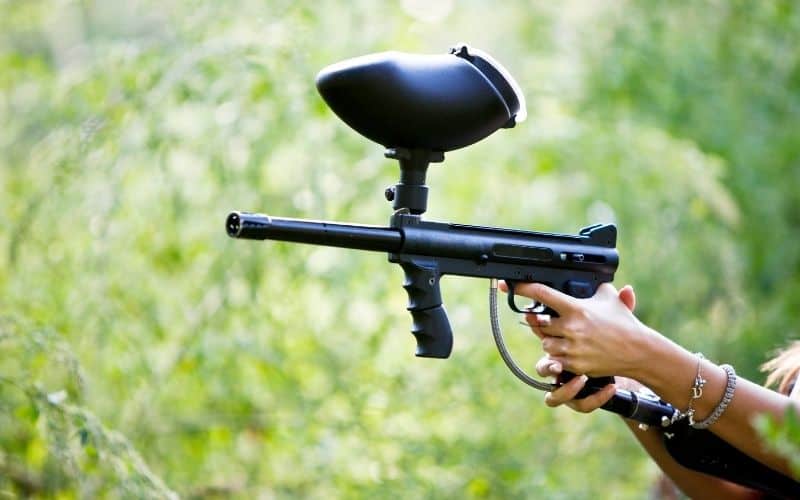 Depending on where you live, there may be strict regulations regarding owning a paintball gun and using it for hunting or killing wildlife.

In most states, paintball guns are still considered harmful firearms and are prohibited to be used in public. Therefore, before you decide to shoot any wildlife in your backyard or neighborhood, find out if your city or state allows that type of activity.

Why Is It Illegal to Shoot Paintball Guns in Some States?

Shooting paintball guns in public puts other people at risk of getting injured. Furthermore, hitting private property with paintball markers can be considered vandalism, which can get you into some serious trouble.

This is why most people suggest trapping as a better alternative for shooting or getting rid of small critters that are destroying your home or property.

While shooting paintball guns can be an incredibly fun sport, using them to kill or drive away squirrels, cats, and birds may not be the most ideal course of action. This is because paintball guns won’t necessarily kill an animal and, at best, may only injure it in the process.

Keep in mind that some states consider shooting an animal with an intention to simply injure is considered cruel, and can put you in hot water if you’re caught doing it.

If you aren’t sure about your state’s laws against killing wildlife with paintball guns, it’s safer to find out first before you do anything that might land you a hefty fine or even some jail time.

Can You Paintball While Pregnant?

Why do Paintballs Fall Out of my Barrel?