Have you ever played a round of Paintball with friends and stopped to wonder what exactly you are shooting at one another? What is this ammo you shoot out of your markers that splatter paint onto your enemies?

Your ammo is actually the game’s namesake. They are called paintballs. These paintballs are round in shape and made out of gelatin, encapsulating colorant. These balls are made to burst upon impact and release their contents onto the surface it lands on. 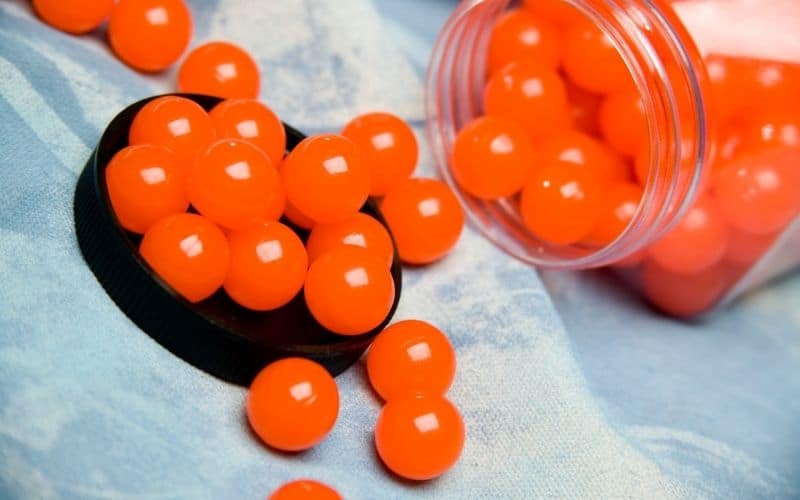 The paintballs are made out of the following:

Colorant – it is essentially the mixture of polyethylene glycol and other water-soluble elements mixed with dye. The dye itself is made of iodine food coloring. The paint is non-toxic and made up of food-grade materials.

Gelatin capsule – also known as hydrolyzed collagen, is a transparent, colorless, tasteless food element. It is commonly acquired from the collagen of animal cartilage, skin, and other body parts.

Note: Though considered edible, we don’t recommend you take your enemy’s “eat paint!” proposal. It isn’t made to taste good, and it isn’t tasteless. It can dry up the mouth and numb the tongue.

Below we will cover how much pressure it takes to burst open a paintball. In case you are wondering if you really do need a gun to play or if you could just chuck paintballs at one another.

How Much Force Does it Take to Break a Paintball? 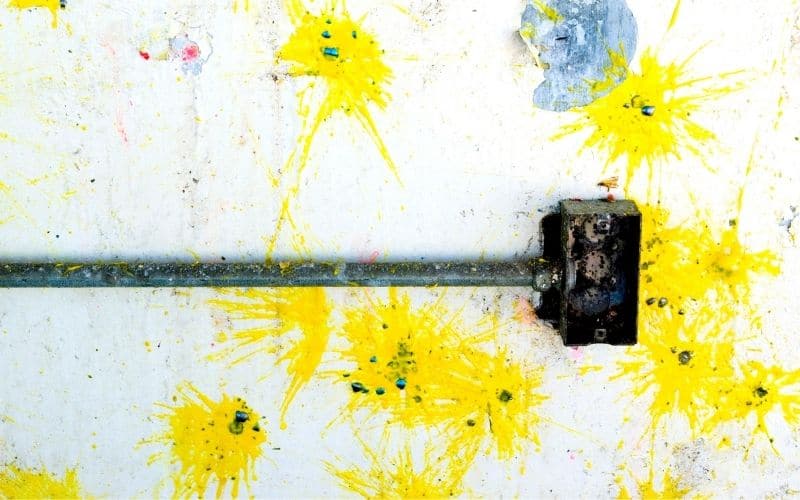 A key aspect to consider is that compression strength differs from impact strength.

A paintball possesses both types of strengths that work against different forces.

Compression strength is what works against the forces put upon the ball during its handling.

When you hold it, transport it, load it into the gun, and when it is within a gun’s chamber. These all produce a measurable force known as pressure.

The amount of pressure the paintball can withstand depends on its compression strength.

Manufacturers devise paintballs to endure copious amounts of pressure at zero velocity. The force applied at minimal velocities, such as a hand smashing the ball, is not enough to break it open.

An object’s momentum is the primary variable to consider in this aspect.

The mass in the equation pertains to the object that will be used in opposition to the paintballs.

The velocity is measured by the rate of change of the object’s position concerning its origin. Simply put, the distance covered and the rate of time it takes (speed).

The way these balls are produced leaves a seam at the center of the surface of the sphere. This is considered its weakest spot.

An object with enough momentum can break through a paintball’s compression strength.

There is actually an art form called Paint Ball Smash Painting. You can watch this little girl apply the right amount of momentum to paintballs to express herself.

The force associated with firing paintballs involves its impact strength.

The impact strength of a paintball is sophisticated. It is high enough to resist the impact of firing and low enough to break on surface contact.

The bolt of the marker conducts low-pressure air to direct the insertion of paintballs into the chamber for firing. It then unleashes high-pressure gas into the barrel through the center of the bolt launching the paintball out of the marker.

Manufacturers devise paintballs robust enough to survive these pressures within the marker. But safely enough to instantly break onto the targeted surface, causing the least harm as possible.

This begs the question:

Can You Break a Paintball? (By Throwing It)

Paintball markers have a muzzle velocity of approximately 300ft per second on average. That is 204mph (328kph).

The average baseball pitcher, who throws for a living, achieves a 92.8 mph/149.3 kph velocity. The fastest pitch ever recorded was 105.1 mph/169.1 kph. That comes nowhere near the velocity produced by markers.

An average paintball is a .68 caliber. That is 17.3 mm in diameter, and a baseball is 74 mm in diameter. Also, take into consideration the distance it will travel before hitting its mark.

All that math is telling us, no. We cannot use our hands to substitute for paintball markers.

While a professional pitcher can break a paintball by throwing it at a surface within range. This doesn’t mean they can run and throw it at moving targets or ensure its breakage in doing so.

In the game of Paintball, there are no substitutes for its main piece of equipment. The paintball markers are essential to playing the game. There are markers you can get for a good price. Instead of resorting to using your hands, check out the Azodin Kaos 3: 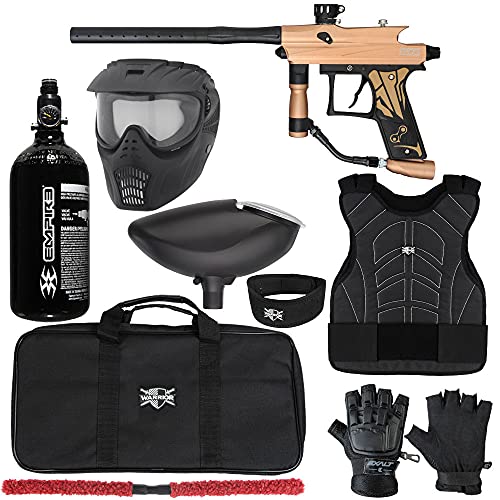 Why Does a Paintball Break in a Gun?

There are varying reasons why a paintball breaks within a gun.

The two most common reasons for a paintball to break in a gun are: equipment mismatch and expired paintballs. 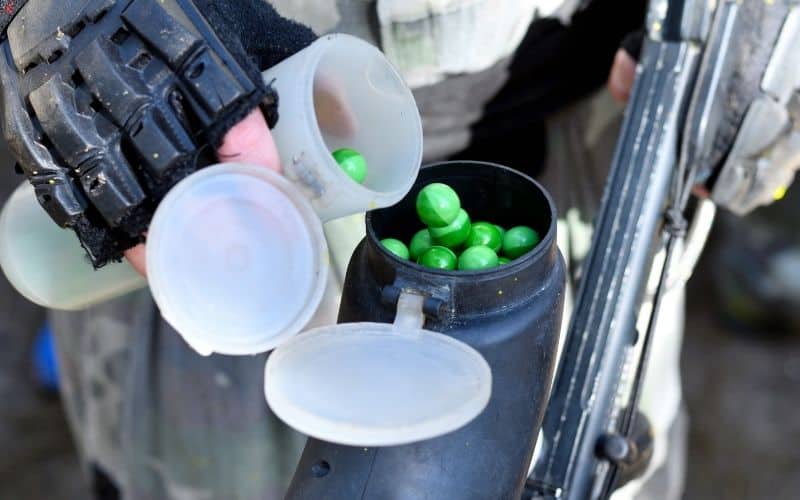 If the interior diameter of your marker’s barrel is too tight, it can cause paintballs to break. The paint can breach into the bolt and may cause the valve to lodge.

Pick paintballs that are small enough to fit your barrel. You can also opt for barrels with a larger interior diameter.

While a smaller barrel is better for accuracy, bigger barrels cater to various paintball sizes, such as the standard issue .68 cal. The Tippmann 14” Barrel  fits .68 caliber and is designed for accuracy.

If you don’t want to change out your barrel, you can look into .50 caliber paintballs . They are smaller in frame and lighter in weight.

The average shelf-life of a paintball is three months. After this, the chemical compounds within can separate, causing the gelatine shell to absorb moisture.

The paintballs will dimple and be brittle enough to squeeze out their contents.

If you store the paintballs between 50 °F to 90 °F in a dry place, its shelf life can extend up to 4-12 months. Remember to turn and rotate them so the components within don’t set or separate.

If they have been in storage for a while, conduct a drop test to gauge their integrity. A drop test tells you if the paintballs are still fit for firing. 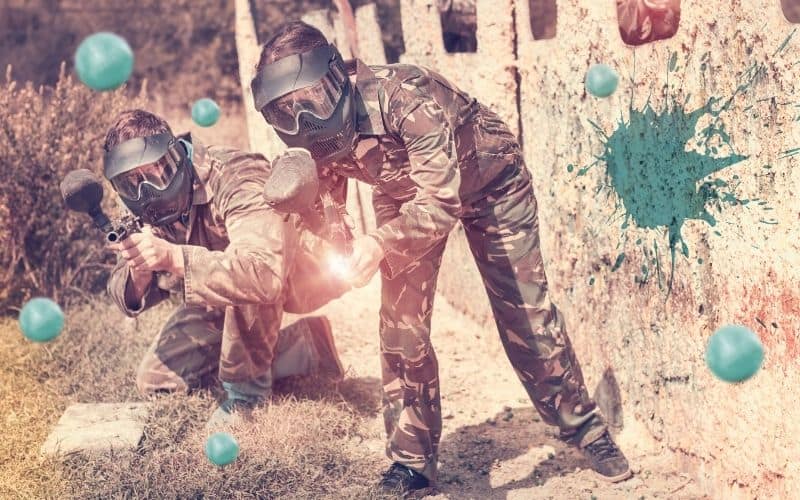 No, they cannot. Its contents are not made up of any volatile materials. Its compounded mixture is specifically designed to be harmless.

Even if you were to store paintballs within an environment with the highest temperatures, they would melt instead of exploding.

Paintballs breaking on impact can be mistaken for an explosion.

Rest assured, they do not explode. The gelatin casing has an impact strength that is only designed to withstand a certain amount of pressure.

When the paintball is shot onto a surface, the gelatin casing tears releasing its contents upon contact. This means the paintball bursts. It does not explode.

Paintball is a game that has been around for a long time. The proper equipment and protocols regarding them are set in place. Safety concerns have been long answered.

Have a blast and enjoy a round of paintball with your friends!

You can look for places to play Paintball with your friends all across the U.S.

How Old do You Have to Be to Buy Paintballs?