Laser tag is an exciting sport that is great for birthday parties, corporate events, or just for a fun night out with friends. It’s a game that is easy to understand and fun to play, meaning almost anyone can pick up a blaster and hop into a battle.

If you’re itching to get into an arena and start blasting your opponents, then we’ve got you covered. We’ve compiled a list of the best laser tag centers in and around Lafayette IN, so you’ll be sure to find a great laser tag experience near you. 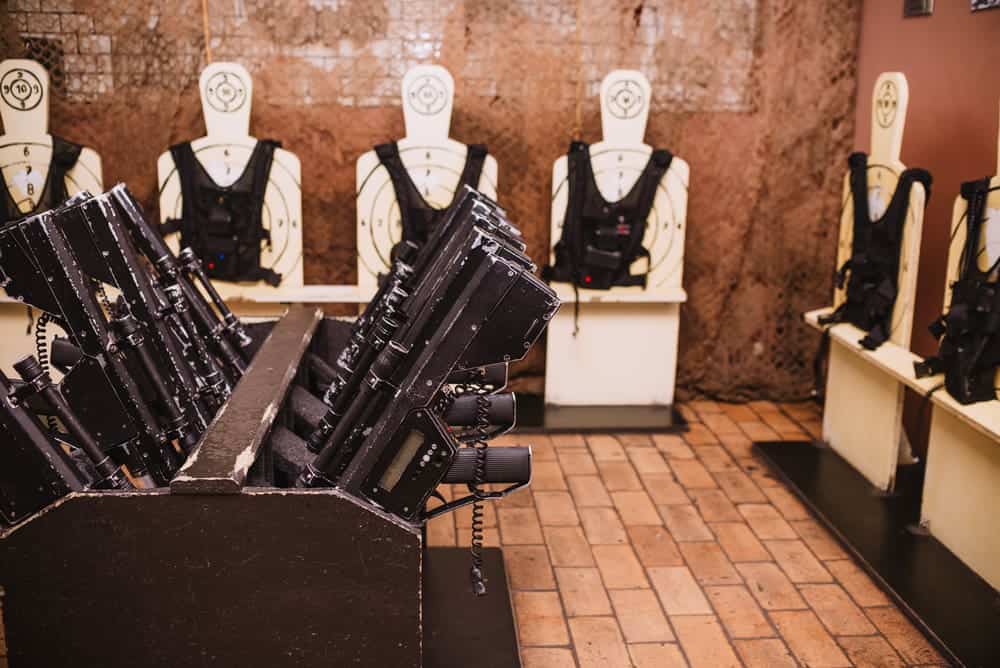 If you’re looking for a laser tag experience near Lafayette, then Laser Flash is definitely an arena you shouldn’t miss out on. This is the largest laser tag arena in Indiana, with a play area that covers two floors and spans over 7,000 square feet.

This arena has a fog machine, pounding music, and a dark play area—the recipe for a fun laser tag game.

If you’re planning on hosting a corporate event or birthday party, then Laser Flash is definitely the place to do it. Their laser tag arena can accommodate over 40 players at once, which will allow for intense battles and will put your teamwork to the test.

Laser tag is a fast-paced sport, so you might be feeling a bit peckish after your battles. But don’t worry—Laser Flash also has in-house catering with a menu full of mouth-watering meals such as pizza, burgers, salads, and more!

Once you’ve finished chowing down, you’ll probably be ready for more activity. Now you’ll be able to explore what else Laser Flash has to offer! Besides its laser tag attraction, Laser Tag also has an arcade full of awesome games.

You’ll be able to play classic arcade games such as Skee Ball and Spin-the-Wheel, while racking up tickets at the same time. Once you’ve stocked up on tickets, you’ll be able to redeem them for cool prizes such as Laser Flash merchandise, toys, stuffed animals, and more!

Xtreme Laser Tag in Avon, Indiana is another great laser tag destination that can host birthday parties, corporate events, or just some laser tag fans trying to have a quick battle. This family-owned laser tag center has a 4,000 square feet arena with two levels, enough space to host battles for up to 30 players at once.

Xtreme Laser Tag hosts games that last from 20 to 25 minutes, at least 5 minutes longer than the length of the average 15-minute laser tag game. If you’re looking for a laser tag arena with longer battles, then this is definitely the place for you.

Another thing we love about Xtreme Laser Tag is the great deals they offer for laser tag games. The more rounds of laser tag you buy, the less money you’ll have to pay per round. They also have daily specials listed on their website, which allow you to get more laser tag playtime for a lower price.

That much running and shooting means you’ll definitely work up an appetite by the time you finish your battles. Xtreme Laser Tag’s concession stands have loads of meals including fries, pizza, and burgers that will fuel you up and get you ready for your next round.

Xtreme Laser Tag is a family-owned laser tag business and has the best of the best in the way of equipment. They’ve received multiple reviews commending their clean amenities and top-notch playing experiences.

Laser Storm is a laser tag experience offered by Royal Pin, meaning a clean play area, great food, and loads of other fun activities are guaranteed! The spacious multi-level play area is able to accommodate around 30 players at once, and each fifteen-minute round is just long enough to have fun but not tire yourself out too much.

Laser Storm’s laser tag has many dividers set up in the play area to provide lots of obstacles for players to duck and hide behind. This spices up gameplay by allowing players to sneak up on each other and making it more of a challenge to tag others.

If there’s one adjective visitors would have to use to describe Laser Storm, it would be “family-friendly.” The staff are all friendly and will try their best to make your stay fun and memorable.

Another great thing about Laser Storm is the great food. With loads of great meals including pizza, nachos, and burgers, you’ll be able to fuel up in between laser tag rounds and keep your energy levels high!

When you’ve finished up with your laser tag battles, why not check out what the rest of the center has to offer? Royal Pin also has over 70 lanes in their bowling alley, an exciting mini golf course, and an arcade in which you can win prizes!

Laser Battle is available anywhere in Indiana, and you’ll be able to request a game in almost any location, including local parks, wooded areas, gymnasiums, convention centers, ballrooms, beaches, rooftops, and more!

Whichever location you pick, Tropical Extremes will come visit you and set up an awesome laser tag play area in no time. They’ll use inflatable obstacles that will spice up the battlefield and can be placed wherever you please, meaning the options for customizing your laser tag arena are endless!

The M-16 is a mid-range gun that shoots quickly, the sniper is a long-range gun that takes longer to prime between shots, and the Oozie is a short-range, rapid-fire gun that is best suited for close-quarter combat.

For a more aggressive role in the battle, opt for the fast-shooting M-16s or Oozies. On the other hand, snipers are a great gun for players who prefer support positions—and you’ll want to feel the thrill of a successful snipe again and again! These gun options open up lots of combat possibilities for your game, and players will be able to choose the weapon they feel suits their playstyle.

Each game is able to accommodate up to 16 players at a time, and you’ll be able to choose the length of each battle. On average, around 150–200 participants will be able to take part in the battle in an hour, meaning this attraction is perfect for events with lots of visitors.

Laser tag is a high-energy, fun-filled pastime that you’re sure to fall in love with—you might be visiting these arenas for the first time, but we bet you’ll soon become a regular customer. There isn’t a shortage of laser tag centers in or around Lafayette, so you’ll be able to use our in-depth review of each center to choose the best laser tag experience nearby.

Know a great laser tag arena near Lafayette that we didn’t list, or want to share your experiences at one of the centers above? Let us know down in the comments!