The Wowwee laser tag assault rifles come in three different colors: red , orange  and yellow . Each color has a different shape and feel to it, making it unique and allows players to feel as though they have their own identity.

Aside from looks, the three versions perform the same functions of a laser tag gun and are powered by four AA batteries . You can purchase each separately or as a set.

For a fun and competitive game of laser tag at home, in your backyard or even in the park, Wowwee launched their Light Strike laser tag blasters series back in 2011. The guns come in two variations: the Striker and the Assault Striker.

We’ll be reviewing the latter in more detail.

If you’re looking for a cool gift to get your children or if you’re just missing the days of spending hours playing laser tag with your friends, Wowwee’s laser tag line is the perfect product for you.

Wowwee are known for their successful range of musical instruments, called Paper Jamz, which are paper-thin and have no physical buttons or keys to press. They’re activated using touch-sensitive buttons, specifically made for use by children and budding musicians.

Similarly, the Assault Strikers are very thin and the only buttons you can actually press are the power button on the top of the rifle, the reload ammo button at the bottom and the trigger. All other functions are performed using touch-sensitive buttons.

The sci-fi detailed pattern on the blasters is a printed plastic sticker that’s stuck to the flat surface of the gun, so players should be wary of it peeling off. Although doubtful, this is an interesting technology, where there are fewer parts to break off.

The thinness of the blasters gives them lightweight, allowing players to engage in battles for longer periods of time without feeling shoulder or hand strain. This makes it an appropriate toy for children and avid laser taggers.

Read on this Wowwee Laser Tag Review to find out more.

The Wowwee laser tag Assault Strikers have many cool features that give you the feel of the actual laser tag environment.

The strikers provide an excellent range that can reach above 150 ft and can vary slightly depending on whether you’re playing at night or during the day.

Pressing the shield button will give you protection against your enemy’s shots and you’ll be receiving only 50 percent of the damage, for fifteen seconds. Once it’s used up, it’ll need to be charged for three minutes before you can use it again.

You should keep the timings in mind and strategize when you’ll need to use this feature the most during the game.

The weapon selection button allows you to switch between “weapon” modes during the battle.

To switch between the weapon modes, you simply touch the weapons button and you’ll receive audio feedback every time you press, telling you which mode your blaster is now on.

Make sure you reload each weapon mode, as simply pressing the reload button once won’t load everything up.

The semi-auto can be useful if you’ve come face-to-face with many of your enemies at once, while the single fire can come in handy when everyone is still in hiding. Put in mind though, that the semi-auto uses up ammo faster, so you’ll have to reload.

To reload, you simply press the button at the bottom of the striker, and you’ll hear a satisfying reloading sound, just like with a real gun.

There are four different teams you can choose from and they’re color-coded into blue, red, yellow and green. You can switch between them by holding the team selection button on your striker until the color you want lights up on the LED lights on your gun.

Like in a video game, the striker also has the “friendly fire” option taken away so you can’t shoot your team members.

The sounds from the striker are very clear and understandable and you can lower or increase the volume as you wish. However, you can’t completely mute it, but you can plug headphones  in if you wish to be even stealthier around your enemies.

The headphone jack is a great feature for parents since this toy can become particularly noisy when played inside the house.

To turn on the blaster, you simply flick the power switch and you’ll then be asked by audio feedback for “fingerprint identification” using the finger scanner button on the gun. This isn’t a real function, but it’s there to give players a sense of engagement with the gun.

You’ll receive feedback again, letting you know that the scan is complete so that you can move on to performing other functions with the gun.

There’s an infrared sensor inserted into the body of the blaster that detects when you’ve been shot at, so you really just need to point anywhere at your enemy’s rifle and shoot.

The striker has a health bar on the bottom of the gun, which indicates how much life you have before you’re out of the game and you’ll be warned when it’s too low. If you die, you can easily respawn by pressing the shield button and holding the trigger down.

The only real downside to the functionality of the striker is that it doesn’t have a score-keeping system, so you can’t really tell who’s winning and you’ll have to depend on the other team’s honesty (which, let’s be real, can get muddled during a competitive laser tag battle).

The respawning option can also make it difficult to know if someone had lost and then joined the game once more.

The Wowwee laser tag assault striker already comes with a practice target that you can shoot at, to practice your blasting skills or just for fun.

You can also buy more if you’d like to have a friendly competition between you and the opposing team, to see who can shoot faster or more shots in a given time.

The practice targets are powered using three AAA batteries , as it lights up as we mentioned above and gives you cool sound effects.

You can also mix and match with more fun attachments and accessories provided by Wowwee for their laser tag line.

The Assault Striker has a variety of attachments to choose from, which are bought separately, to upgrade the features of your rifle and give you an advantage over your opponents.

This attaches onto your striker and acts as an under-barrel shotgun that increases the blaster’s power, as it can take down multiple people at once, as well as the speed of the shots.

It has a real recoil action, to give you the feel of an actual shotgun. Some users criticize this feature, saying that it simply vibrates and doesn’t actually recoil. 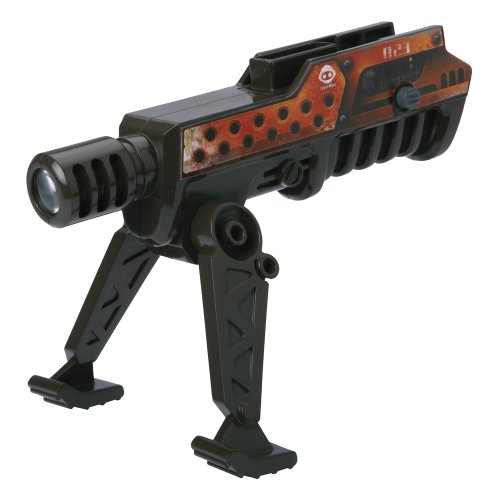 This is a machine gun bipod that attaches onto your blaster and locks into fully-auto firing mode, as well as extends the life of your ammo, giving you a tactical advantage over your opponents.

Again, this is said to have a real recoil action of a machine gun. 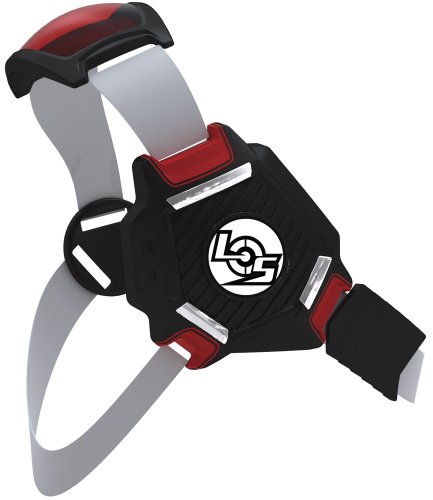 Although optional, this can be an essential piece for playing, as it makes the target on your opponent much clearer than shooting at their striker.

The chest dome and the shoulder sensor on the light strike target vest are now the targets you should shoot at. They’re connected using Velcro straps, which means that they can be adjusted, but many users have said that they’re really made for children and slim adults.

The chest sensor has a power button and LED lights surrounding it that act as your health-meter. The color of the dome will change as soon as you pair it with the blaster to the color of the team you’re in.

You can also activate the shield from the vest itself rather than the striker, and an advantageous option is that you can easily use it to activate other’s shields too. Reviving your teammates is also an option. 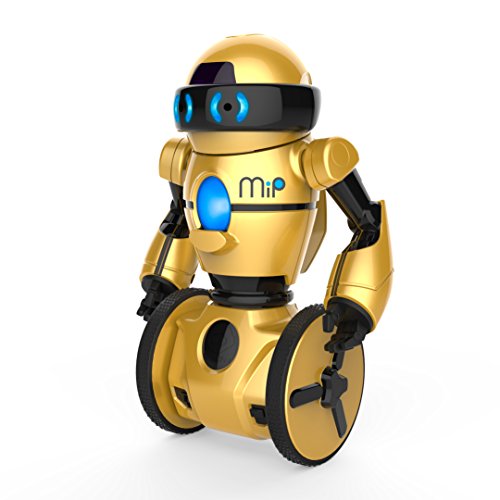 The Wowwee MiP (Mobile inverted Pendulum) robot is a talking, dancing robot that balances on two parallel Segway-like wheels, with a slick black and white or gold design. It’s a fun expressive toy on its own, that can be controlled using hand gestures or paired with its own app to access more entertaining activities.

What does this little humanoid have to do with the Wowwee laser tag assault strikers? Well, the robot can battle other MiPs using the LED light and the infrared sensor in its head to shoot and detect hits from opponents. Thus making it the ultimate laser tag battle.

Laser tag is a fun game that has been played by people of all ages for a long time and the opportunity to have the same enjoyment and competitiveness anywhere you’d like has fallen right into your hands with the Wowwee laser tag blaster.

The variety of colors, features and accessory options made available by Wowwee is endless and will make the battle between you and the opposing team a lot more exciting and energetic.

Simply choose the rifle of your preference, the extra gear, and attachments that you’d like, make a strategy, form a team or play one-on-one with your favorite laser tag player and start shooting!