Laser Tag is built off the exact same idea but reinforced with modern technological development.

Laser Tag is a game that guarantees fun and excitement for all ages alike without any danger nor violence.

Personally, I was a big fan of Halo games (First-person shooting games, solely on Xbox platform), and I’ve always wanted to know how it would feel being the “Master Chief” himself from Halo, walking around in some fancy equipment and a gun, “shooting” and getting “shot” while working towards a certain goal.

I think it’s such a thrill, and truth be told, this exact thrill really is immensely provided in Laser Tag games.

To put it simply, Laser Tag is a battling game that uses laser tag guns that emit invisible infrared-beams (and sometimes a visible light just for targeting and effect) when you pull their trigger.

Emitted infrared beams are received by infrared-sensitive targets worn by the players or installed in the battling arena.

These beams are encoded with the identity of the gun itself that allows the scoring of points achieved by the player.

The Origins of Laser Tag

You’d be surprised to hear that the idea of Laser Tag first originated in the late 1970s and early 1980s when the US military created a system that uses laser beams and blank cartridges for combat training called MILES (multiple integrated laser engagement system).

In MILES, soldiers are equipped with small laser sensors scattered all over their bodies, which detect when the soldier’s been “hit” with the laser gun beam.

Once a soldier is “hit” medics can use the digital readout to determine which first aid method is most suitable to practice.

Laser Tag is exactly the same, with the exception of the need for medics (we wouldn’t want that now, would we?).

Speaking of safety, Laser Tag is usually regulated by a set of basic known rules which further emphasizes the player’s safety, and we’ll mention them later on in this article.

Concern about the laser tag safety? Here’s our detailed guide!

What Exactly Is a Game of Laser Tag Like?

The rules of a Laser Tag game are all determined before the game begins through an agreement between all players. The rules, for instance, include the number of ‘lives’ each player has and the effect of tagging a person which determines how many lives the tagged person will lose.

It also includes the gun’s firing rate and the stun duration – in which the tagged person is rendered unable to move for a set period of time.

The premise and idea of the game are also determined beforehand, and that’s where things get really exciting.

The regular Laser Tag game is just scoring as high as you can by tagging other enemies/opponents, but you can actually spice that up through these Laser Tag game variations.

This is the most common alternative to the regular Laser Tag to play. Its premise is very simple, players are divided into teams, each team has a flag or anything that the opposing team needs to try and collect whilst protecting their own base.

You must collect the flag, return it to your base without getting shot. If you do get shot, that’s it. You’re out.

It seems pretty traditional, but when you get down to it, you’ll realize how fun it really is.

It’s best if you have a minimum of 4 people when you play this game, and it gets even better with more people.

The best place to play in would be a park or a large space for the players to spread out.

This is an ideal game to play if you have a group of six people or more. Split the 6 people into 3 groups of 2 or their multiples depending on how many players there are.

These 3 teams are divided as follows, 2 teams are ‘ambushers’ and 1 team is the ‘convoy’. The job of the convoy is to reach the predetermined finish line without getting shot, or they can win by shooting all the ambushers.

This game is the real deal, it’s hard because the convoy team is only inclusive to 2 people while the ambushers are twice their number, but that’s what gets things heated up, in a good way, of course!

People tend to play this game with a time limit, as you’ll wait ages for the convoy to actually reach the finish line. 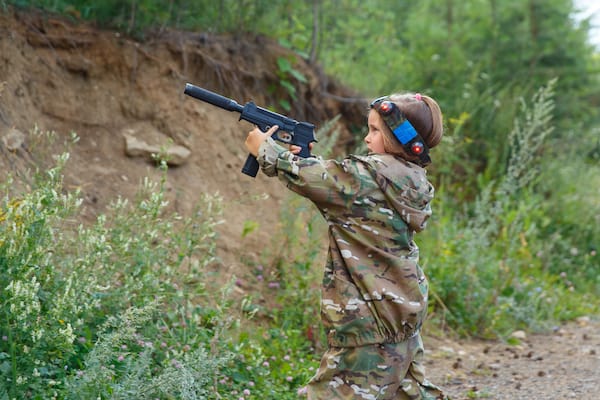 Contrary to popular belief, as well as its name, Laser Tag guns don’t emit actual laser, the reason being is that laser is associated with potential dangers to skin and eyesight.

Laser Tag is a safe game, children as young as 5 years can play laser tag in laser tag arenas hosted by different companies. Adults of all ages can, of course, engage in this too.

Laser tag doesn’t implement violent tendencies in kids. Parents can rest at ease as the tagging machine does look like a gun but it is in no way harmful in the slightest. Laser tag games also put emphasis on the ‘no violence’ rule by forbidding any physical contact between players, hence the tagging being at far proximity through the “gun”.

Laser tag games are very beneficial to kids and adults alike; it’s a great way to exercise – some have even adopted it as their own sport – and rev up a child’s sedentary life, so you’d burn off these cals all while having the time of your life.

It’s also a great way to develop your kid’s strategic thinking, social skills (especially if they’re in teams), and most importantly, critical thinking and problem-solving skills.

Ditch the consoles and get your kids to be the “Master Chief” himself! Instead of just leaving them to dwell on their fantasies, let them build confidence, self-esteem and a sense of pride in their achievements.

The genre that’d suit laser tag games would be electronic, hyped up and energetic songs.

Daft Punk is one of the well-known electronic music composers that’d definitely hype up the atmosphere.

For adults who like horror music to implement a serious atmosphere, here you go!

Below are a couple of other games that you may like if you’re into Laser Tag!

This game is fun and also very physically engaging. It’s a single-player game in which you’re equipped with a VR lens that you see through a setup inclusive to obstacles that you’re supposed to slice with your lightsaber.

These obstacles appear in time and sync with background music or songs. It’s an optimum choice for kids and adults alike as it doesn’t involve any dangerous methods.

Don’t confuse it with the Laser Tag game variation, but it’s indeed built off a similar premise.

This version of Capture the flag involves glow-in-the-dark equipment that includes 2 light orbs, LED bracelets for every single player and a set of territory lights.

It’s played outdoors in the dark. It involves nearly the same rules as Laser Tag: Capture the flag, but the flag, in‌ ‌this‌ ‌game, is the orb.

You have to steal it from the enemy team. It gets a bit physical, in which if you’ve invaded the enemy’s territory (marked by their territory lights) to attempt to capture their “flag” and get touched by one of the enemy team members, you get sent to “jail” where you have to wait for one of your comrades to free you by slapping your hand.

We’re quite certain that you’ll enjoy laser tag every once in a while. No matter how old or young you are, there’s always room for a good game with your friends and family!

More activities? Here’s our comparison between laser tag and the paintball
Previous

Outdoor Laser Tag vs. Paintball: Which is for your next battles?