Playground Baron is reader-supported. When you buy through links on our site, we may earn an affiliate commission.

Many of us played with toy guns throughout childhood.

Nevertheless, playing with toy guns as an adult could also bring lots of fun and help relieve stress.

So, how to select toy guns for adults?

For instance, you might want to consider if it’s a gun for the whole family (including children) to play together, or strictly for adults.

Furthermore, there are many kinds of ammunition used by toy guns. Each kind of ammunition could affect the types of games available to you.

In this post, we will round up the 5 top toy guns that are recommended for adults.

If you played with toy guns while growing up, chances are you’ve heard of the Nerf brand. Nerf is a long-established manufacturer of toy guns, with ammunition ranging from foam darts and water to even laser.

This particular Nerf gun looks like a revolver, except it uses foam darts instead of real bullets. It features a rotating barrel with rapid-fire, and does not require batteries to operate!

Each time you want to fire, you would have to cock the blaster to load it. Some users commented that their children had trouble loading this Nerf gun, but we think it is just a matter of teaching them how to use it.

The Nerf N-Strike Elite Strongarm Toy Blaster has a good range of up to 30 feet (9 meters), after which accuracy declines. This makes it more suited to indoor play.

While this Nerf gun is built with quality and comfort in mind, it is relatively lightweight and should be easy to hold.

Those buying this as a gift could consider selecting the “Standard Packaging” instead, which comes in a more appealing design. 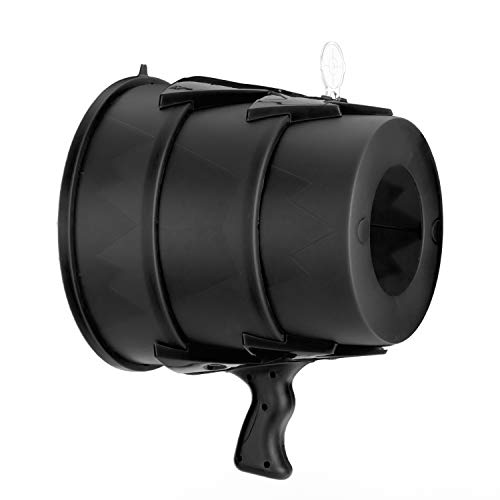 The Airzooka is unique in that it shoots air instead of darts, water, or laser. This means no batteries are required, and you do not need to reload the gun!

This blaster is suitable for home and office parties, such as your department’s team building session.

The air blaster is shaped like a bucket, unlike conventional gun designs. It is made of lightweight plastic and has a small handle at the bottom, ensuring even kids could hold it easily.

Once you pull and release the trigger knob, the blaster shoots an invisible ball of air at a range of 20 feet (6 meters).

While the blaster’s range is quite short, it is still fun to play indoors. Aiming the gun is easy as it comes with a pop-up sight.

One thing to take note is that children should only play with it when supervised by adults, as it could cause discomfort when shooting from close range. 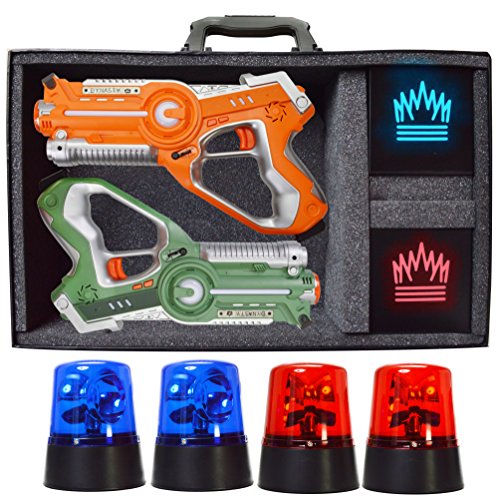 DYNASTY TOYS Capture The Flag | Glow in The Dark Yard Games for Adults and Families. Includes 2...
Buy on Amazon

Dynasty Toys is a company that aims to make interactive games that get people moving. Nowhere is this more obvious than in products like this, where the laser tag blaster forms just one part of the overall game experience.

The “Capture The Flag” Laser Tag Set is designed as a game to be played in your backyard or outdoors. This set comes with 2 laser tag blasters, 2 Dynasty cubes, and 4 siren base lights.

The lasers used are rated Class 1 in the US, meaning it emits infrared beams that are safe for consumer use.

The “flags” are printed on the Dynasty cubes, which have the option of 4 colors. Each color denotes a team. If you have four players, you could each choose a color, creating a “Free-for-all” game mode!

The blasters are powered by 4 AA batteries each. In addition, each Dynasty cube runs on 3 AA batteries, while the base lights run on 3 AAA batteries each . To save money in the long run, it is recommended to get a set of rechargeable batteries  so that you would not have to purchase new batteries each time they are used up.

Regardless, battery life is reportedly very good, so it is unlikely that you would have to recharge your batteries often.

Some users commented that they received guns that did not work as expected. That said, a number of customers have praised their customer service for providing replacement guns quickly.

Overall, the Dynasty Toys Capture The Flag Laser Tag Set is great for those looking for a game that involves more than just toy guns.

This is another popular product by Nerf, and it isn’t difficult to see why. The Rampage blaster outdoes the Strongarm by having a larger capacity for its foam darts – 25, to be precise. This provides you with lots of ammunition and saves time in a battle.

Reloading the drum is a seamless process, meaning while others are reloading their blasters, you could continue firing away!

Like the Strongarm, this Nerf gun has a slam fire feature. All you have to do is hold the trigger and slide the gun handle. However, this Nerf N-Strike Elite gun has a much longer range of 75 feet or 23 meters, making it ideal for playing outdoors in large spaces such as parks or by the seaside.

The package includes 25 official Nerf Elite darts, so you are assured of bullets that fly accurately and are safe for the whole family to play together. (Buy more Elite darts )

Some users commented that the gun could get jammed if you do not prime it properly for slam firing. The drum’s location could also get in your way at times.

Despite these flaws, we think that this Nerf gun performs well in an outdoor battle. It is also fairly powerful for a blaster that does not run on batteries! 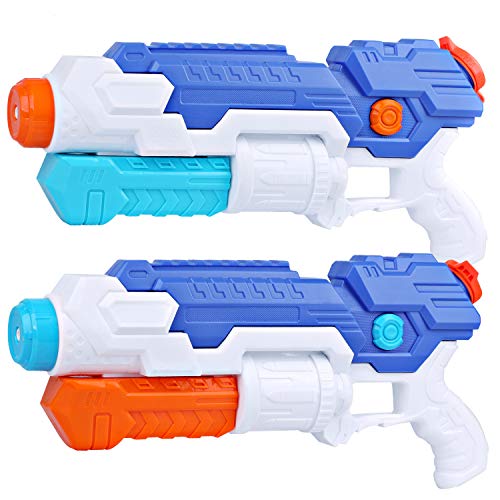 For adults though, water guns may be a way of reliving your childhood or even a form of family bonding.

This water gun blaster by PEFECEVE comes in a pack of two. The squirt gun boasts a range of 40 feet (12 meters), meaning you do not have to go close-up in order to spray your opponent with a powerful stream.

While most water guns require you to pull the trigger to shoot, this blaster only needs you to fill it up with water and pull the pump.

The water tank is able to hold up to 800cc. Even when filled up, the blaster still feels relatively easy to hold. A small number of users commented that the seal around the nozzle was not as tight as they hoped, resulting in water leaks.

The gun’s casing is made of ABS material designed to be break-resistant and is also non-toxic. One downside is children’s fingers may get slightly caught in the pumping action, which we think should be included in the instruction manual as a warning.

We recommend purchasing Dynasty Toys’ Capture the Flag Laser Tag as the best toy guns set if all-round family fun and unique gameplay are what you are looking for.

However, Nerf N-Strike Elite Strongarm Toy Blaster is also great for simple battles, while the PEFECEVE Water Gun Blaster should be considered if you get lots of warm weather where you live.