If you’re craving an adrenaline-pumping activity where you can utilize your never-used combat skills, go for laser tag. In case you don’t know what laser tag is, it’s similar to paintball, only you’ll be going home with clean clothes and no sore spots from all the paintball hits.

Laser tag was originally developed by the military as a more realistic training method for their soldiers. That’s why you’ll need to put on your Commander-in-Chief hat and start strategizing for laser war. 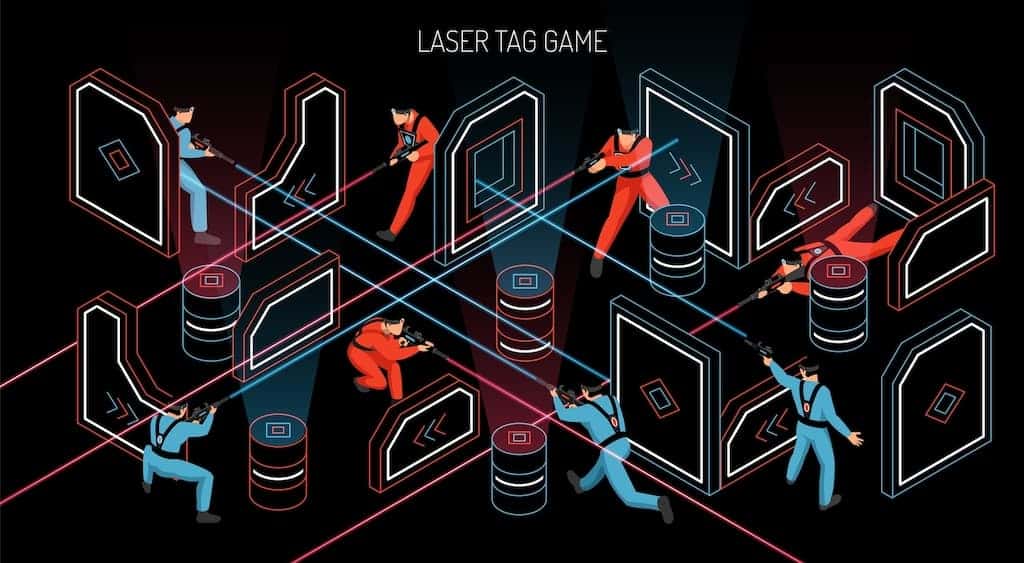 Having said that, there are two ways to play laser tag. You can gather your team and agree on a laser tag strategy, that’s one way. The other way is a sneakier one, where you take advantage of the game’s vulnerabilities and utilize a few cheats.

I’ll be telling you more about both ways, and you can pick and choose whatever works for you.

Here are a few tips and tricks to help you with your laser tag strategy.

If you’re taking winning at your next laser tag game seriously, then you need to prepare. The first thing to do is to know the arena. Get a map of the arena you’re going to and study it well.

During the game, it’s going to be dark and you’re going to be preoccupied with not getting shot, so knowing your way around the arena is crucial. You can use this to decide on the best hiding places and good spots to start shooting some opponents.

Go for an offensive strategy. Yes, it’s a good plan to keep yourself safe from getting shot, but you won’t be scoring any points for that. On the contrary, if you play offense and keep shooting and hitting opponents you get higher scores.

Remember, the strategic offensive principle of war is that offense is the best defense.

Being part of a team when playing laser tag is so much fun and can actually help you score higher. You just need to create a good strategy that your team can follow.

When playing in a team, make sure you split up if you’re more than two people. Bigger teams huddled together make easier targets for opponents. They can actually take out the whole team within a few seconds, so don’t give your opponents this advantage.

Crouch walking can do wonders for you. It’s going to help you walk around the arena without being noticed by your opponents. It’s also a good and fun way to exercise your glutes. Here’s a valid excuse to replace your gym visits with more laser tag games.

This technique is commonly used by the military, so it’s only natural to use it in your laser war. Just make sure you and your team train to crouch walk before your next game.

A wise thing to do when your game starts and you first enter the arena is to take cover and observe. You can use the cover to shoot any passing opponents or even just note how they move around.

If you’re playing with a team, make sure you don’t all stay in the same place. This will only make you easy targets. Move out and select spots that are spread out, so you could cover a wider area of the arena.

Stay in The Middle

If you’re all starting the game from the same spot, don’t be the first to go in or the last to go out. Always stay in the middle, this keeps you safe from opponent snipers waiting for people to walk in or out.

It’s a good idea to tell your team to follow the same strategy. You and your team can position yourselves in the middle of other groups and let them take the fall when leaving or entering a gathering spot.

Give Your Eyes a Chance

How to Win at Laser Tag?

Now that we’re done with the usual way to attempt a win at laser tag, let’s get down to business and check out a few good cheats.

You’ve got your arena map all memorized, right? Now select a good spot to camp out. What’s camping in laser tag? It’s taking cover and hunting passersby. Don’t get too comfortable though, you can do this for a few minutes every now and then to increase your score.

It’s also a very good strategy if you’re playing with first-timers. They’ll probably be walking around cluelessly and will make for easy targets.

There are sensors in your gun and vest. These sensors record every time you’re shot and your score is adjusted accordingly. Covering your sensors will give you unlimited lives as there won’t be any record of how many times you were shot.

You can use dark colored bubble gum, good quality tack or duct tape to cover up the sensors. Just be careful not to damage them as they’re very expensive to fix or replace. An alternative to covering the sensors is standing sideways, as there are no sensors on the shoulders or sides.

Don’t worry, if you cover the laser source on your gun, you’ll still be able to shoot. The laser pointer is just for making it easier to aim at targets. What you actually shoot with is an infrared beam, which is not affected if the laser is covered.

Covering your gun’s laser will make it more difficult for people to spot you. There’s always a risk of your getting shot right when you’re shifting all your attention to shoot an opponent.

You can cover your gun’s laser with tack or opaque duct tape or even dark-colored gum. Again be careful not to damage anything when doing so.

If you’re a bad shot, you can do one of two things. Whenever you spot an opponent you’d like to shoot, get pretty close to them and shoot. This way you won’t miss.

The other option is to stay farther away if there’s more than one person you plan on shooting. When you’re far away from your targets, the infrared beam becomes wider, thus shooting more opponents in the process. Don’t let your target skills stop you from winning.

When all else fails, restart your vest. Yes, you read that right, you could restart your vest and all record of the times you’ve been shot will be erased. Don’t worry, your own shots won’t be lost, as they’re recorded on your opponents’ vests, not yours.

You can restart your vest by plugging and unplugging a wire into your vest’s recharging socket. Just make sure no one from the opponent team sees you doing so.

It’s a dark arena, most people’s eyes take time to adjust to the darkness, add to their confusion by wearing dark clothes. The darker the better, I say go for black clothes.

Avoid clothes with any bright colored prints or logos. They’ll only make you easier to spot and cancel out the effect of the dark clothes you’re wearing.

This camouflage will give you a great advantage over your opponents and will make it so much easier to sneak up on them. 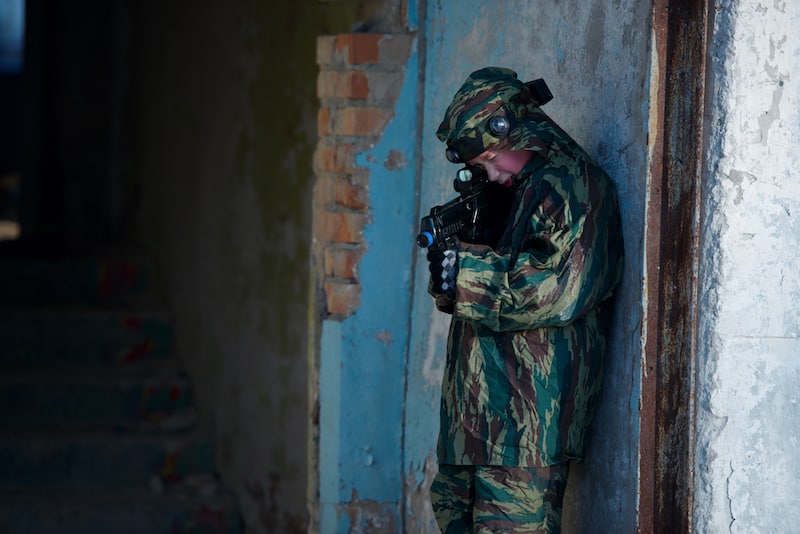 Be the first one to select your gun. Check the gun with the longest range and go for it. Once you know which is the golden gun, make sure you choose it every time.

When you’re done camping and choose to join the battlefield, keep moving. Don’t stop no matter what happens. A moving target is a difficult one.

Make your moves unpredictable and fast. With the arena map in mind, this shouldn’t be an issue for you. Let’s agree on something, in laser tag, you’re either camping or moving, don’t ever stop.

As long as you’re playing, you fire. You fire like there’s no tomorrow. Non-stop firing is guaranteed to scare people away and get you a few shots you wouldn’t have got otherwise. You can even end up shooting opponents you didn’t see standing, or camping, there.

Check if your arena has higher levels, if so, go for the highest. Standing on a high spot makes it easier for you to spot and shoot opponents. It also gives you the advantage of being harder to see and shoot.

Get your sniper skills ready and go for the kill.

What to wear to play laser tag?

Combat strategy isn’t just about planning out offensive or defensive maneuvers. Little things count, such as surroundings, weather, and even clothing.

We’ve mentioned wearing dark clothes before. Most indoor laser tag arenas are blacked out, so dressing in dark clothes is a no-brainer!

But the problem is, not every arena is blacked out.

What to keep in mind is to be aware of the type of arena you’ll be playing in. This way, you can match your wardrobe strategically.

For instance, if it’s a wooded area, it’s best to go for a camouflage pattern. Your goal is to not stick out like a sore thumb, or you’ll end up becoming the main target!

How to destroy in laser tag?

But there’s nothing else that can replace practice. If you want to win, you have to keep playing and playing!

I mean, it’s possible to win just by beginner’s luck. But to consistently conquer round after round, you need to practice and play as much as you could.

One favorite of mine is the hit and run style. This covers most of the tips we’ve already given you.

Essentially, you’ll just need to fire like a maniac and keep on moving. To do this effectively, you need to build your stamina up.

So make sure that you’re physically fit! Jogging every day will give you that extra edge.

Keep an eye out for how your enemies play so you can figure out who to target. I suggest going for opponents who are snipers, or the ones who don’t move around.

If all else fails, you can do the laser tag sweep move.

What is the laser tag sweep move?

This is a move that requires a lot of practice, too. So you may not get it right at your first try, but it’s worth trying!

First, sweep or glide the laser blaster across one or several enemies, and then press the trigger.

If you do this, the laser will fire in the pattern you just made, making it possible to hit several opponents in one go.

It’s a pretty straightforward maneuver but be sure you don’t get hit in the process. Keep moving, move quickly, and keep firing!

Now that you have all this info, you can start creating your laser tag strategy and dreaming of the victory to come. Whether you’re playing alone or with a team, the tips and cheats in this article will teach you how to play laser tag like a pro.

The most important thing to remember is you have to plan ahead. You need to study the arena’s map and come up with a strategy accordingly. You also need to make sure everyone on your team knows what they’re doing.

One last thing to remember is that “All is fair in love and war”.

Outdoor Laser Tag vs. Paintball: Which is for your next battles?

1 thought on “How To Cheat At Laser Tag? 17 Strategies/Tactics To Win Like A Pro”