Family game night is more important than modern society believes. Sadly, in today’s high-tech world, the odds of gathering around a game of Scrabble or Monopoly have become quite slim.

It’s games like laser tag that appeal to players of all ages. It involves a lot of moving around and also requires that you scheme and plot. It gives you a rush of adrenaline but also helps you unwind. 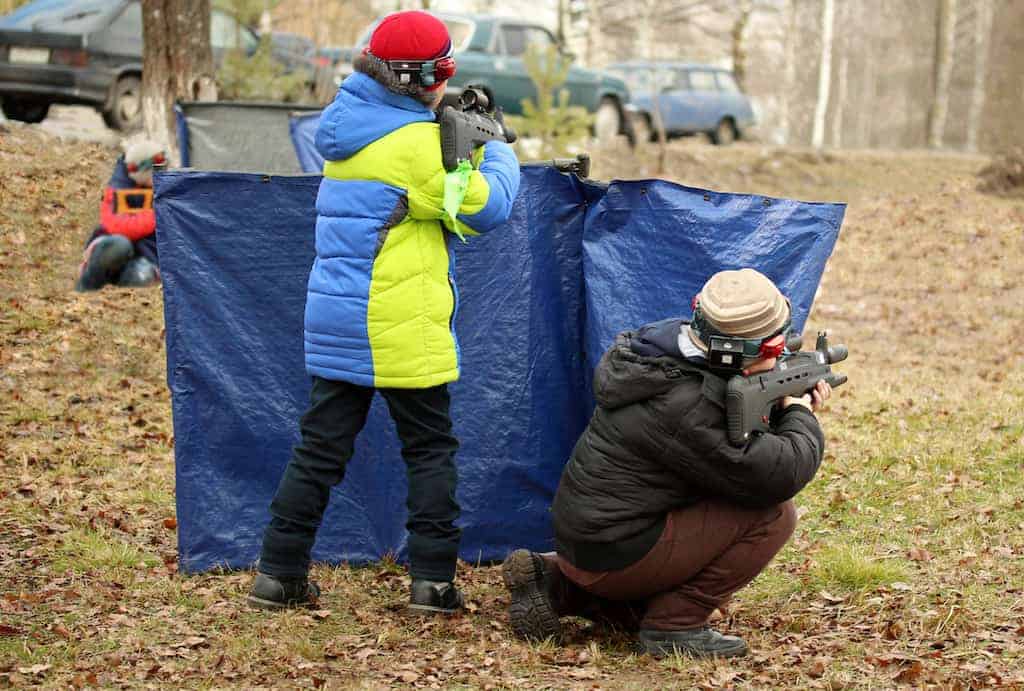 You’ll never get sick of laser tag because the variations are infinite.

Let’s take a look at the Top 10 Laser Tag Games for Your Family! We’ll also explore the origins of the game and the aspects that make it a fantastic choice for family fun.

Here’s a compilation of the coolest variations of laser tag for your next family game!

This game mode is a great choice for first-timers. Experiment and get a hang of the game without worrying about getting eliminated early on.

Game length is predetermined, so the game only ends when the timer runs out. This means you can continuously refill your ammunition. You can use the energizer to revive yourself if you run out of lives as well.

Players can split into teams or play each man for his own. The winner is determined based on score. Tag more to win! 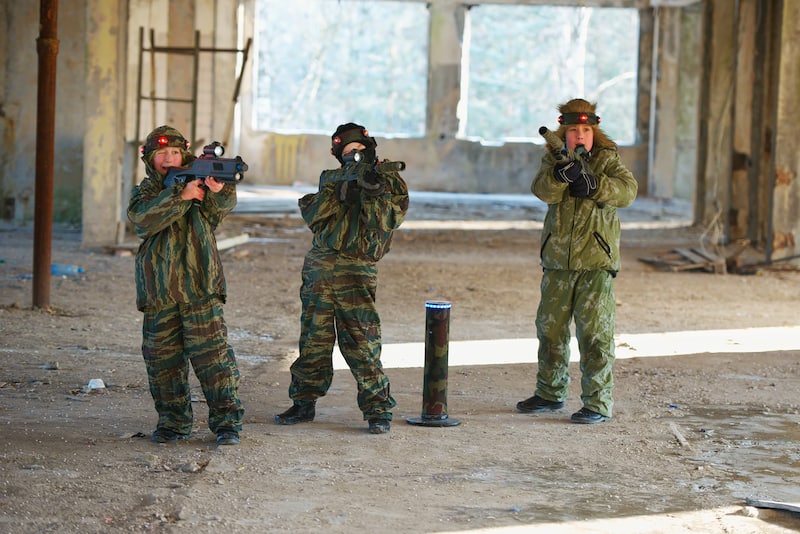 Elimination is also one of the simpler laser tag scenarios. In this version of the game, all players have a limited number of lives.

Your goal, therefore, is to simply tag the members of the other team. One after the other, make them run out of lives until they all get eliminated.

If you have an odd number of players, here’s a way to make the game both fair and very intense!

1 player is given an advantage: a laser gun more powerful than the rest. At the beginning of the game, this player is neutral. This means they’re not a member of either team and aren’t allowed to shoot.

The team which successfully tags this powerful player first gets them to join their side of the battle.

As the game goes on, if the opposite team tags this person, they force him to change sides. This can keep happening all throughout the game!

This is a solo elimination game mode that’ll keep you on edge. In this classic, if you don’t up your game early on, you’ll find yourself watching from the sidelines.

Here, it’s every man for his own. Try to preserve your limited lives while tagging other players. If you’re the last man standing, congratulations!

The best thing about this game is that it’s suitable for both small and big families. You can play this free-for-all game with 3+ players! 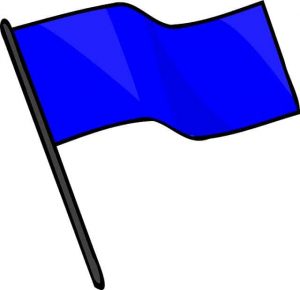 A popular classic as well, this game has the two teams scheming towards a common goal. The team that captures the flag and brings it to its headquarters wins!

However, if the player holding the flag at any point gets tagged, they have to drop it right away.

Another fan favorite is this capture the flag variant. For double the fun, there are 2 flags instead of just 1. Each team has a flag at its base.

Your team has to multitask. You’ve got to simultaneously defend your flag as well as infiltrate the opponent’s base and steal their flag.

Sometimes, the rules require that you safely bring the conquered flag back to base without getting tagged. In a simpler version, you only have to touch it.

This notorious game is more calculated than other laser tag variants.

Much like secret Santa, jot down the names of all players on small pieces of paper. Then, let each player draw one of those.

The name you pick becomes your designated target, and you become their designated assassin. This means that you can only tag this person. You’re not allowed to tag anybody else, just your assigned victim. Likewise, you become another player’s sole target.

Everybody gets a chance to hide in the arena before the game begins. Once the game starts, your goal is to tag your target to get them eliminated. You need to achieve that before being tagged by the player going after you.

Once you’ve taken your target down, they hand you their piece of paper. Accordingly, your target’s target becomes your new target.

This game format includes some role-playing.

Two members form a Convoy. This team’s goal is to cross the finish line. Meanwhile, other teams of two try to take down this Convoy.

The Convoy is outnumbered by default in this game, which makes it pretty intense. This team can only win if one of its members arrives at the finish line. The enemy teams win if they tag all members of the convoy.

If you ever feel the need to make this game more intense, set a timer at the beginning of the game. All the more pressure!

Unfortunately, this game only works for a family of 6+ members. 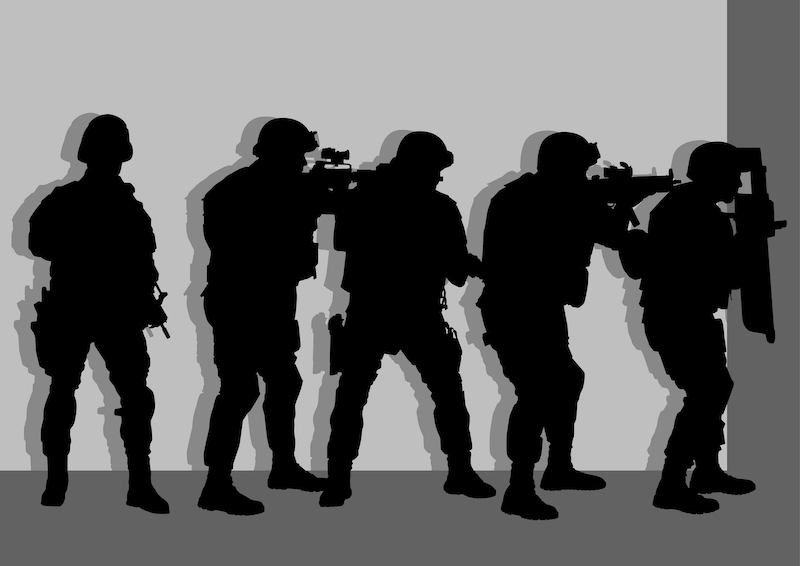 Ever been the person who does all the work on a group project?

Well, if you ever get picked for your laser tag team’s VIP role, the pressure’s pretty similar.

In this game, each team picks one of its members for the VIP position. If the VIP runs out of lives, the entire team loses. Accordingly, this stellar member becomes the lifeline of the team. This also makes them the most sought-after member.

All team members still have to tag enemy players and protect themselves throughout the game. Above all, however, your team must protect its VIP player at all costs!

Similarly, the top targets you should focus on bringing down are the VIP players of enemy teams.

Similar to VIP, this game puts your team’s fate in the hands of 1 chosen member.

The player assigned to the medic’s role replaces the energizer entirely. This makes them the most valuable member of the team. Your medic is the only player who can revive other team members when they run out of lives.

However, the medics can’t heal themselves. So if you fail to protect your medic from running out of lives, they immediately get eliminated. And if this happens, you’re basically living on borrowed time.

The game ends when the timer goes off or when one team collectively runs out of lives. If both teams make it till the end, the team that tagged more opponents wins!

This game throws loyalty out the window.

At random time intervals, or whenever tagged by a member of the opposing team, you’re forced to swap teams. Whether you like it or not, you’ll inevitably find yourself working with your team members one minute and against them the next.

This particular uncertainty makes the game very thrilling and can be a very powerful game-changer. You may be on the winning team now, but which team will you be on when the timer goes off, signaling the end of the battle?

The constant team switching can also be both confusing and hilarious.

Did you just shoot a player who’s on the same team as you? Oops!

Get ready for your next battles? Here are our top laser tag sets!

Now that we’ve dissected some of the best laser tag games, let’s travel a few decades back in time. When it started, the super-fun laser tag was the farthest thing from a game.

Back in the late 1970s, laser tag was initially created as a form of combat exercise for the US army. To this day, actually, some militaries use similar methods.

Later in 1984, laser tag as we know it was brought to life by George Carter III.

Ever since laser tag arenas have grown popular all around the globe. Carter was even given an award by the International Laser Tag Association for founding the laser tag industry.

To Play Or Not To Play

Can children join the family fun and play laser tag? Or is this a game that fosters violence among children?

This is a valid concern, given the history and the nature of the game. Some countries set age restrictions. In Germany, for instance, you have to be 16 or older to play.

In many countries, however, little kids are allowed and even encouraged to play this game. For a good reason!

Take Away Lessons from Laser Tag

If we look closer, laser tag can actually be very nourishing.

First off, it’s a fun form of exercise. You do a lot of physical effort and leave that arena sweating. Needless to say, it’s much cooler than your local gym.

It’s also one of the very few activities that can easily pull us away from our digital screens and bring the family together. Talk about some bonding!

Moreover, laser tag is truly about tactics rather than violence. You can shoot all you want, but you’re not going to win without a strategy.

Here are our starter guides on ​how to play and win laser tag games!

This tactical factor of the game can only stem from cooperation and communication. Both of those things are crucial to the well-being of relationships, especially within the family.

It’s also crucial that we teach our youngsters the importance of teamwork. Along the way, they ought to listen to what others have to say and make themselves heard, too.

And what better way to teach them than through an enjoyable and exciting game?

Nobody likes to get picked last, especially little children. Traditional ways can also fuel disagreements and disrupt the peace. Ditch the old methods of picking teams, and opt for new ways that won’t result in any hard feelings.

Another simple option is to use a randomizer. You can find one online, or download an app on your phone.

One of the things that makes laser tag family-friendly is the lack of safety concerns. The game doesn’t even include a laser. They’re just infrared beams.

Just in case, here are some rules that’ll keep this game disaster-proof:

Now that you know what safety guidelines to abide by, here are some tips and tricks that’ll help you up your game!

We have covered safety points for laser tag games in this article. Do have a look!

As you can see, there’s no fixed game format. The laser tag is actually pretty versatile, so you can mix and match all you want.

Different arenas usually offer different variants. Sometimes, diversity depends on the level of technology they have at hand.

Here’s what you need to know about the basic variations of laser tag:

As I said, there are literally endless ways to play laser tag. If you ever need to make your game more challenging and maybe even hilarious, here are some twists you can add:

Laser tag might have started out as a military exercise, but we’re glad it didn’t stop at that.

This game is like a mostly blank canvas that you can paint however you want. The possibilities are endless! Most importantly, it’s a chance to clear your head, strengthen the family bond, and have loads of fun.

Disconnect your Wi-Fi and connect with your family over your favorite variant of laser tag!

Best Laser Tag Set with Vests – Why and Why not?