Laser tag is an adrenaline-filled game, that’s also safe and clean. It’s suitable for all age groups and genders.

It’s exciting when played in a laser tag arena with special effects and awesome setups, but it’s still fun to play at home, indoors, or outdoors. 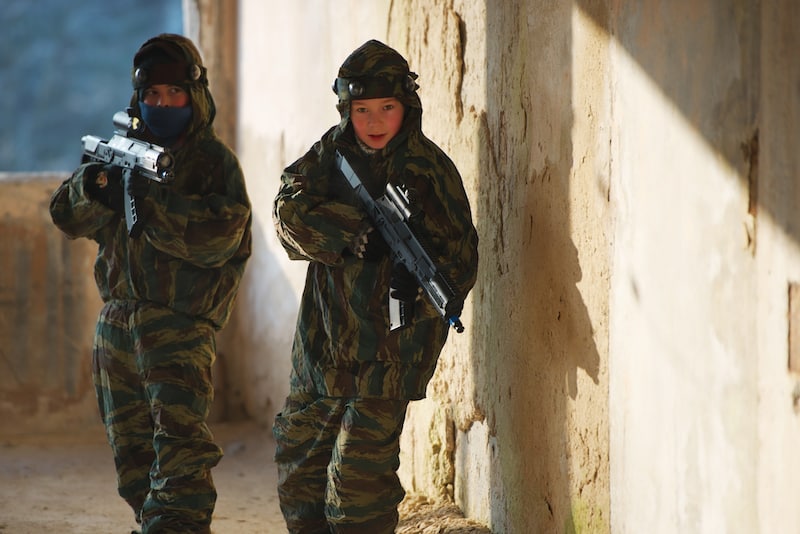 If you’d like to join the action or you want to know more about it, here’s a quick guide on how to play laser tag games. Enjoy!

From Star Wars To Laser Tag

Laser tag was created in 1984 by the brilliant businessman George Carter. The inspiration behind the game was the hit movie Star Wars, which invaded every theatre and household in 1977. 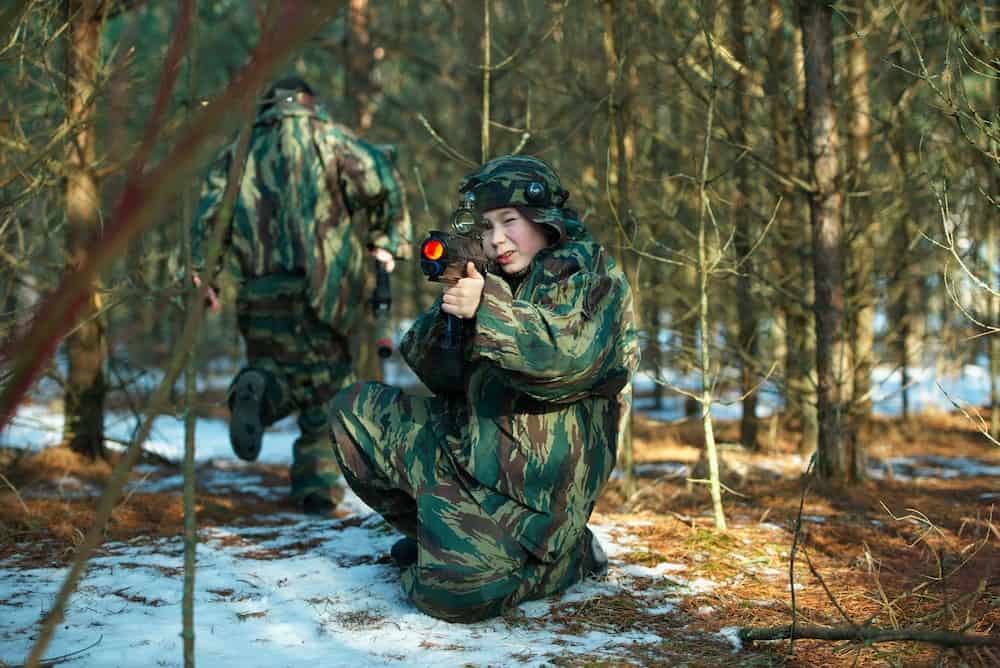 George Carter was 32 at the time and heavily immersed in the go-cart track business. After watching Star Wars, he had a dream and a vision of a game just like tag, where the players have light blasters and the score is always recorded.

Everybody thought that laser tag was just a fad and banks were reluctant to back up his plans. He invested in that area and 35 years later it’s as popular as ever, maybe even more!

Laser tag is a lot like paintball, but much safer and cleaner, no one needs to put on protective gear, and there’s nothing to clean up after the game.

The idea of laser tag is to shoot or tag your opponent and try not to get hit in the process. Every player has an infrared gun and a headband with three sensors. Everything you do is automatically registered, so the points you score and the hits you get are all recorded!

The range of the infrared beam is around 650 feet, which is much longer than that of paintball, so you can hit a target that’s much farther off. This adds a lot more excitement to the game and lets the playing arena have an assortment of configurations.

A referee is a gamekeeper. He’s supposed to explain the rules of the game to the players, state the essentials of safety clearly, specify the details of the game mode, and point out the play area boundaries. He’s also available for assisting the players at any stage of the game.

How to play laser tag?

There are many modes of playing laser tag and each one has an elaborate set of rules. The difficulty levels go from the very basic setup, where no player gets eliminated, to the very advanced, where you have a mission and a rule book.

These aren’t a part of every game mode, for example, they’re absent from the basic setup. In some others, like Immortal arena, you score 50 points for shooting a target.

Targets spruce up the game and add a layer of strategy. It motivates the player to have a priority list, what needs to be done first? What gives the best score? What’s easier to achieve? It’s all about winning.

The Name of the Game

Every mode has an expressive name, that gives away the nature of your mission, the ultimate goal, and how to reach it. Choosing the challenge you’re going to share with your friends is a thrill in itself.

In some game modes, players can earn an opportunity to heal or even to revive. It’s more fun like this and it doesn’t feel like an easy way out. It takes a lot of smart planning to return back to the game when you run out of health or ammo.

You get individual points for shooting a target or a base, bigger scores for shooting another player, and the jackpot is taking him out, in the versions that allow that.

In team games, a team gets rewarded when a teammate shoots a target, shoots an opponent, or takes out an opponent.

In one of the more elaborate scenarios, you get a big fat score when you steal the enemy’s flag, and the highest score if you can return the flag to your base. 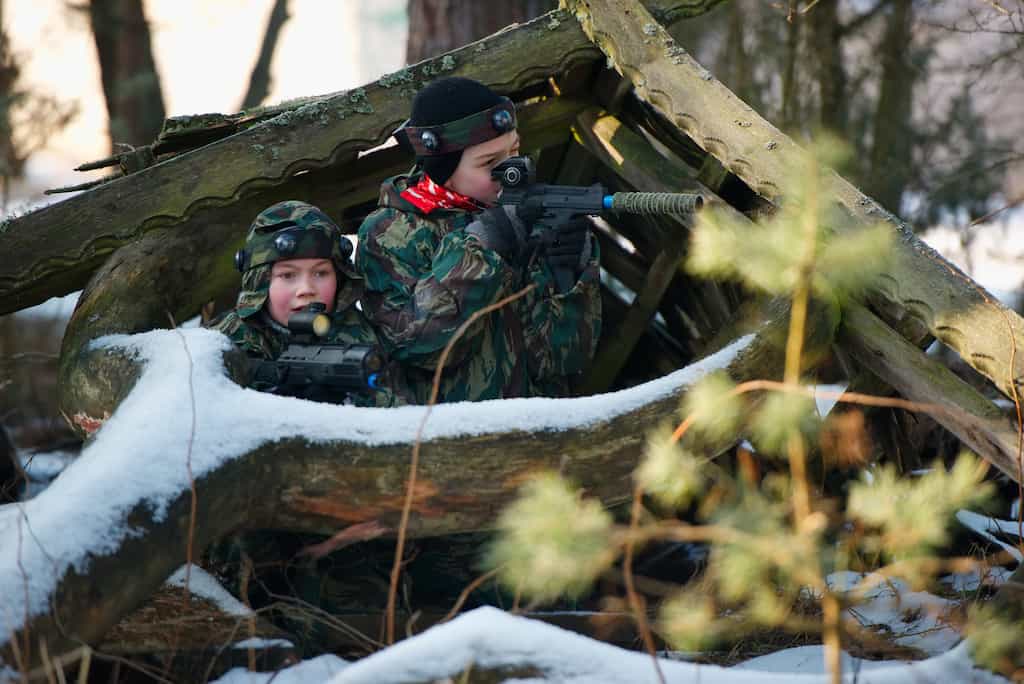 Who Wins in the End?

There’s no single definition for winning here, it depends on how the game is meant to be played. In the basic games, the winner is the player who gets the highest score, since no one is eliminated.

In team games, the winning team is the one with the highest score, the group that eliminates all the other team members, or the team that accomplishes the mission.

In individual games with advanced setup, winning is scoring high, in addition to remaining till the very end and reaching a difficult goal.

It seems at first that there’s so much to memorize, but it gets simpler after the first game. The referee explains the rules at the beginning of the game and keeps the game going as agreed throughout its duration, till a person or a team wins.

How long is a game of Laser Tag?

When played in purpose-built laser tag arenas, tag games normally take 20-30 minutes to complete. This includes a short briefing, actual gameplay, and a review of scorecards after the game.

When using your own laser tag equipment, game length can vary based on how the laser tag blaster is designed. For instance, the Nerf Lazer Tag Phoenix Set has a choice of 10 or 25 hits per round, while theDynasty Toys Laser Tag Set has a fixed number of 9 lives.

There is even a high-tech version known as “Recoil Laser Tag” that offers you the opportunity to “respawn” at the team’s base!

In our experience, playing laser tag at home will give you a game length of about 10-15 minutes, while if you play outdoors with many obstacles, it could take up to 30 minutes.

Regardless of your choice of laser tag equipment, we find that customization is key – if you think the game is too short, consider adding obstacles  to make the gameplay more challenging!

Here are some tips and tricks to really win this game!

Get to know the laser tag arena, if this is your first time there, try to mark the ins and outs and the next time you’d be better prepared. A map would be great, see if you can get hold of one!

Familiarize yourself with the gun. Your reactions should be swift and accurate, so you have to know the controls of your gear thoroughly. Take a moment to learn the fire rate, reload time, and clip size.

Be there first, just like at work, the early bird gets the worm and the early player gets to tag the other players as they get inside the arena

Be offensive, not defensive. This is actually a rule in martial arts and carries through in tag. You get more points if you hit someone than for staying untouched, so even if you get hit while aiming at your buddy, at least you’ve evened out the score.

Communicate with your team and use some signs to help you pull off a complex plan. There’s safety in numbers, remember that. Your group can keep you safe when you’re hit and they’ll have your back when you try to score.

Look for more tips and tricks to win the game? Here’s our cool post!

Who Can Play the Laser Tag Game?

Anyone who can play tag can also play laser tag. Just be of height above the barriers and have enough stamina to last for at least half a game.

Laser tag is very popular with children, teens, and adults. It’s not a gender-specific game and the ladies are usually admirable fighters who add amazing skills to their teams.

It’s great as a fun activity, a competitive sport, or to let off some steam at the end of a long week. Personally, I feel completely refreshed after an hour or so of such games.

A couple of old buddies can challenge each other to play one to one, a group of friends hanging out with each other can split up into two teams and zap the others for some action. 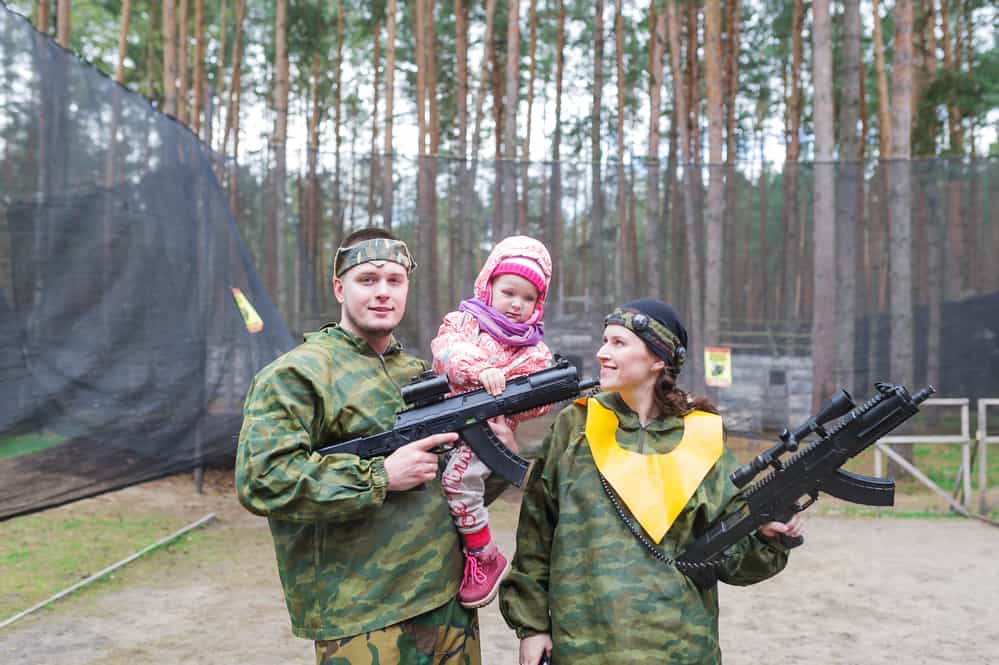 You could also take your party and get to know another group in the laser tag arena. This seriously ups everyone’s game, you’d all learn so much while playing with opponents you’ve never seen before.

There’s no fixed number in these drills. Any number of players can start gearing up and zapping. Anything from 4 to 30 players is good and gets a game going.

It also works well as a corporate retreat activity, a family event, or a party highlight. Nothing brings a group together like targeting one another with an infrared gun. There’s a lot of bonding in that.

The game is usually played at arenas with special settings and effects, but it can be played at homes as well. Just like tag!

What to wear to play Laser Tag? Dress for Success!

The laser tag arena is usually dark and sometimes foggy. Wear something dark and easy to blend in. Bright colors will make you an easy target, so no red T-shirts.

Put on something comfortable; tight shoes, flip flops, sandals, and heels aren’t the best choices on that terrain. Sneakers are perfect.

You might want to be careful with perfume, I know it’s a lovely scent, but it could get you noticed and easily hunted. Deodorant is good though.

Using real lasers is not very safe, and there’s always a reason for concern if children are around, however laser tag doesn’t really use the real laser at all, just a regular infrared ​​beam.

It’s not what the name laser tag suggests, but this is how it was designed from the very beginning.

Infrared is a low energy electromagnetic wave, and it’s a part of the invisible spectrum. It’s the kind we use in our remote controls, as it just sends a signal, without posing a threat to people or things.

The real mishaps in laser tag are not related to that light beam at all. It’s more often that we see a sprained ankle or a scratch. Care should be taken while moving around to stay safe and to protect the other players as well. Also, the number one rule is no physical contact while playing.

Playing is actually more than just a fun time, although that’s a worthy enough reason. Laser tag is one of the games that wash off a stressful weak. It also offers a great environment for bonding and getting to know your friends in meaningful ways.

Games of strategy are amazing, pair that with physical activity, and they become the ultimate sport.

What Shoes should I Wear for Laser Tag?