Would you run away if someone is trying to hit you with a ‘Light Amplification by Stimulated Emission of Radiation’?

Yeah, I probably would do too! 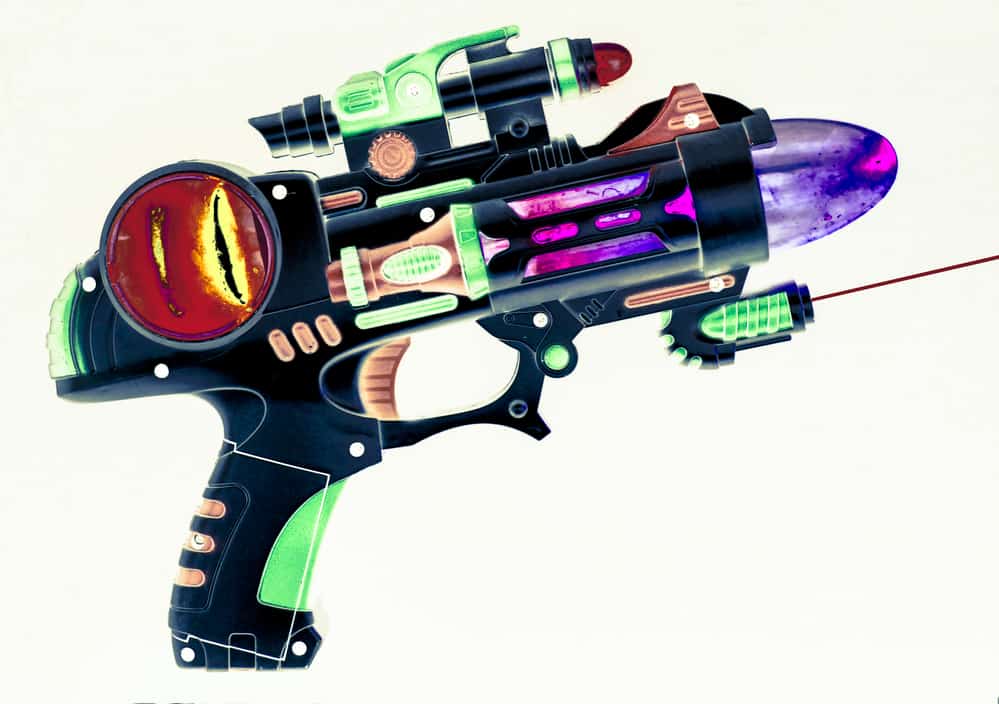 Unless we’re playing a laser tag game and ‘Light Amplification by Stimulated Emission of Radiation’ is just a more impressive way of saying LASER!

When was the laser tag invented?

Can you imagine that the idea of the laser tag game was probably inspired by the electronic phaser guns from the Star Trek movies?

In 1979, the first phaser gun toys that used infra-red lights were already on the market.

And soon in 1982, a man named George Carter III started working on the idea of an arena where people would use laser guns and target sensors to play a game.

The first game was held in Dallas, Texas, in 1984 and the first laser tag guns were available on the market in 1986.

Actually, you and your friends can buy yourselves a laser tag set and enjoy playing anywhere!

Now that you know some background info about the laser tag game, we can start to get to the more interesting stuff.

A typical laser tag consists of a laser gun (also called a phaser or a blaster) and sensors, which are usually placed on vests or headbands.

The Idea of The Game

Each player gets a laser tag gun and wears a vest or a headband with sensors.

All you’ve got to do is hit your opponent’s sensors and protect your own from being hit or – as players like to call it – ‘tagged’.

There are several game variations that you and your group can choose to play, and thus you have to decide all the rules of that particular game beforehand.

As you probably figured, the laser tag guns are the centerpiece of the game, but what you might not know is that they usually don’t use ‘actual’ lasers, surprise!

Instead, they use invisible infra-red beams of LED.

What happens is that the infra-red transmitter on the toy gun emits a collimated beam of light that’s directed towards your opponent’s sensors located on their vests/headbands.

The infra-red receivers on your opponent will absorb those rays and use optical filters or modulation detection, announcing your victory!

Well, you can skip the physics lesson.

All you need to know is that this light is safe enough for children above 7 years old to play with, and it doesn’t hurt the eyes.

Tips to Keep In Mind

The laser tag gun has a heat sensor on the bottom, meaning that it won’t fire until your hand touches it.

So, you’ll need both your hands to be gripping the toy gun to be able to fire.

Also, in close-range shootouts, keep your distance to avoid collisions.

Although the toy gun won’t shoot in the first place, it’s always better to play it safe from the start, right?

The design of the toy guns are made to impress people of all ages, so expect all kinds of cool shapes and colors, without worrying about the weight because they’re often designed to be lightweight and easy to use, yet at the same time durable.

The laser tag guns have a pretty wide range, so you can play with them anywhere you desire.

Although most arenas are built as dark rooms with black walls or separating/hiding blocks, it’s also possible to play outside in daylight.

However, the laser tag gun range is somehow limited in sunlight.

It’s important to know that the laser tag guns are supplemented by computers, radios, and sound systems to add exciting vibes to the game and announce who’s hit, who’s out, and information of that sort to keep everyone on their toes.

Each arena offers players its unique instructions and precautions lists, but some of those regulations are the same.

Let’s take a look at the general precautions:

Concern about the laser tag safety? Here’s our detailed guide!

Can you see the lasers in laser tag?

Because laser tag guns use infrared, and not actual lasers, you won’t be able to see the beam.

This is one of the reasons why infrared was used instead. Using visible lasers is going to make the players disoriented, for one thing.

But the more important reason is that shooting lasers at other people is quite dangerous! It can cause eye or skin damage, especially if the laser is strong.

Infrared is much safer, and it won’t make the players dizzy!

How does laser quest work?

Laser Quest is essentially just laser tag. The name is different because it’s the name of a laser tag franchise.

As part of their brand, they renamed the game as laser quest to make it more unique to their business. Even the equipment is named different: “Laser Quest Pack and Gun”.

Anyway, even if it is just laser tag, they did add a unique twist to the game. Every time you zap another player, you gain points. However, if someone else zaps you, you lose points, too.

Remember, you need to hit the flashing targets located on each player’s front, back, shoulders, and on the front and sides of the laser blaster.

Under Laser Quest, there are also different games that can be played:

Each laser quest game is played indoors equipped with fun and challenging obstacles, as well as cool light effects. It’s also a quick game, lasting only 20 minutes, which includes briefing and set up.

How do laser tag sensors work?

Because laser tag uses infrared, there needs to be a receiver that can register if a player is hit, and who hit them.

This is what the sensors are for. Depending on the laser tag equipment you use, the sensors can be on the gun or even a separate vest.

If you successfully hit an opponent, the infrared beam from your gun will be absorbed by the sensors. These sensors are light-absorbing, and inside are optical filters.

Through these optical filters, the infrared light is modulated and detected. Now, each gun will emit an infrared light that is encoded with unique information.

Once it is detected through the sensor, it will trace back to a specific gun or player. This makes it easier to track points and see who tagged another player.

Laser tag is a super cool and safe game that you can enjoy anywhere with your friends to challenge your wit, reflex, teamwork skills, perseverance, and much more.

It’s also one of the fastest ways to know who’s got your back!

Next time you meet people who bug you at work/school or those annoying people who keep stealing our pens and never give them back (we know you!), challenge them for a laser tag game, gather your BFF squad and take your revenge by tagging them all!

Best Laser Tag Set with Vests – Why and Why not?

How To Cheat At Laser Tag? 17 Strategies/Tactics To Win Like A Pro